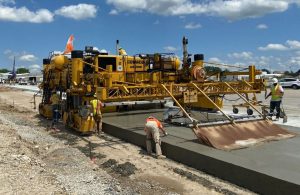 KWAME, via their joint venture with HR Green, Inc., provided project management for the $6.07 million, four-phase reconstruction of 0.2 miles of the taxiway known as Kilo (Taxiway Foxtrot to the cargo apron, an area leading to Lambert’s North Cargo Area). The highly complex project included removing existing Portland Cement Concrete pavement and replacing it with 23,996 square yards of new concrete while portions of the taxiway were in operation.

The ACPA Missouri/Kansas Chapter selected the project as the best PCC pavement project constructed in this category in the state of Missouri in 2020. The annual awards program recognizes high-quality workmanship, quality and creativity in concrete pavement projects.

The general contractor was Millstone Weber, LLC. The consulting engineer was Crawford Murphy and Tilly.

“This project included several unique and challenging components necessary to allow reconstruction work to occur while minimizing impacts to airport operations at STL including some aspects that have rarely been attempted before, if ever,” said Anthony Arnold, Kwame Building Group project manager. “Typical standards couldn’t be met based on the unique qualities of this project, so we worked with the FAA to come up with a feasible solution.”

The primary project challenge was that construction had to be completed while portions of the pavement were in operation, which is highly unusual. It was critical that Taxiway Kilo be able to continue to provide access to the airport’s Air Cargo Apron, which serves high-traffic tenants like FedEx, UPS and Amazon.

A phasing plan was developed that allowed passage of aircraft down one side of the taxiway while the other side was completely rebuilt.

At any given time, there was up to a 3.75-foot drop off as close as 15 feet from the aircraft wheels. Because a full safety area could not be provided, aircraft tugs were used to ensure safe passage for aircraft as they passed through the construction zone. Continuous barricades lining the work zone, along with temporary markings, edge lighting and wing walkers, helped keep the tugs safely on track.

A tight time frame and limited work hours also posed a significant challenge. It was critical that the overall project be completed before November so that normal cargo operations could be restored before the busy holiday season. The project’s four distinct phases were required to be completed sequentially, stretching the contractor’s baseline schedule to its limits. With cargo operations occurring overnight, the contractor’s work hours were restricted to an eight-hour window during the day with no weekend work allowed.

Because of the hour restrictions, concrete pour volumes had to be reduced, requiring the contractor to break what might have been one long pour day into two shorter pour days. Through successful coordination and communication and diligent work by the contractor, the project was opened for use 18 days ahead of schedule.

KWAME has completed numerous projects at Lambert since 1999, including the $62 million, award-winning Airport Experience Program, the largest renovation in Lambert’s history, and also the restoration of Concourse C and other areas following the EF4 tornado that hit the airport in 2011. Kwame received the American Concrete Paving Association Award in previous years for its work at Lambert.