A groundbreaking ceremony to officially kick off the construction of the R.P. Lumber CENTER, an ice rink and recreational facility located off Governors’ Parkway adjacent to Edwardsville High School. The groundbreaking ceremony is happening on Thurs., March 25, 2021, at 4 p.m. Parking for the event will be available behind the high school. Open to the public, this event will happen, rain or shine. 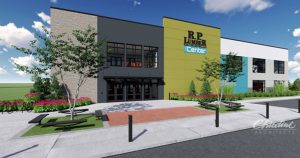 Robert Plummer and the Plummer Family, in which they include R.P. Lumber employees, recently donated $2 million to make the project a reality. The R.P. Lumber CENTER is the third and final park project as part of the city’s Better Place to Play Campaign. In 2016, the Leon Corlew Park and Splash Pad in Edwardsville was built because of the initiative, followed by the Plummer Family Sports Park that opened in spring of 2020. The R.P. Lumber CENTER is continuing to seek naming rights, advertisers and sponsors for its development slated to begin construction this spring.

Speakers at the groundbreaking event will include Edwardsville Mayor Hal Patton, Parks and Recreational Director Nate Tingley, Robert Plummer and a representative from Chiodini Architects. Groundbreaking and photos will follow.

The new R.P. Lumber CENTER will include an ice rink, four-lane track, fitness and teen center for the Edwardsville, Glen Carbon and surrounding communities.

Construction is slated to begin next month.

Anyone interested in learning more about the “A Better Place to Play” campaign can find information online at https://www.cityofedwardsville.com/ or call (618) 692-7538; or on Facebook and Twitter.