SPRINGFIELD – Two national experts on reapportionment and redistricting told an Illinois Senate panel on Wednesday that there are a variety of options at the state’s disposal besides using detailed census data to redraw the state’s congressional and legislative district maps.

Ben Williams and Wendy Underhill, both of the nonpartisan National Conference of State Legislatures, briefed the Senate Redistricting Committee about the basics of the redistricting process and what options states have to using census data.

Using data other than the Census may be necessary this year because the COVID-19 pandemic, combined with a number of natural disasters in various parts of the country in 2020, forced delays in the Census Bureau’s work. Although the numbers needed to draw congressional districts are scheduled for release in late April, the detailed, block-level data that states use to redraw their legislative district maps won’t be available until late September.

Census blocks are the smallest geographic units used by the Census Bureau for tabulating populations.

Williams noted that Illinois faces a number of unique challenges. First, he said, the state constitution sets an early deadline of June 30 in the year following the census to approve a set of maps. If lawmakers go past that deadline, the process is handed to a bipartisan legislative commission to draw the maps.

The second challenge, he said, is that the state’s congressional and legislative primaries are in early March, one of the earliest primary dates in the country, so maps must be completed in time for potential candidates to know what district they live in so they can circulate petitions to get their names on the primary ballot.

“First, not all states have the opportunity to use an alternative data source because quite a few states say explicitly in their constitution that they must use the decennial census data,” she said. “But (Illinois) is not in that group. It is in the group where the constitution is silent about what the data source would be. So this may be something you would think about.”

Underhill said none of the options available are perfect.

“And if any of them were great, then all of the states wouldn’t be so anxious to wait for the census data, they’d go ahead and use some other source to start with,” she said.

Among the options at Illinois’ disposal, she said, is to use population estimates from the Census Bureau’s American Community Survey. That survey is conducted every year, but Underhill noted that the Census Bureau compiles rolling five-year estimates that provide the kind of block-level data that can be used for legislative districts. 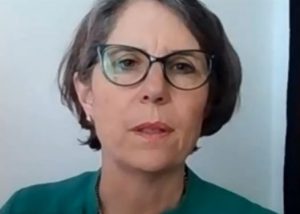 Another option, she said, is to use the Census Bureau’s 2020 population estimates for Illinois, although those do not provide block-level detail.

Other options, she said, include asking the Illinois Supreme Court for relief due to the unusual nature of the 2020 census. Lawmakers also could pass legislation moving back the candidate filing deadlines and the date of the primary election.

Still another option, she said, is what some people are calling the “two-step.” That would involve drawing maps based on data that is known to be inaccurate, and then coming back for a special session after the detailed census numbers are released to make adjustments.

But Republican Sen. Jason Barickman, of Bloomington, said he had significant concerns about using anything other than official census numbers.

“To me, that is the single most important thing that we need to address,” he said. “I’m already concerned that the use of faulty data risks violation of the Equal Protection Clause (of the U.S. Constitution), the Voting Rights Act, and jeopardizes the very principles that I believe both sides of the aisle adhere to, whether that’s supporting communities of interest, protecting racial minorities and otherwise.”

The committee is planning to hold a series of as many as two dozen public hearings throughout the state this spring to receive input from residents about how they think different regions should be represented. The committee also plans to produce an online web portal where individuals can try their hand at drawing maps themselves.

PHOTO: Wendy Underhill, redistricting expert with the National Conference of State Legislatures, provides a Senate committee with a primer on redistricting laws and the status of the 2020 census. (Credit: Blueroomstream.com)