SPRINGFIELD – All Illinoisans 16 years of age and older outside of Chicago will be eligible for COVID-19 vaccinations beginning April 12, and the state announced a “metric-based” phase-in to greater reopening Thursday.

The so-called “bridge phase” to reopening can begin when 70 percent of seniors 65 years of age and older have received at least their first dose of the vaccine, according to the governor. As of Thursday, that number stood at 58 percent. 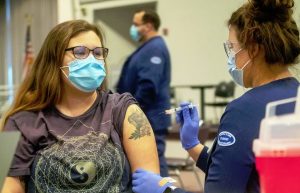 It is also dependent on at least 20 percent of intensive care beds being available. Other metrics, such as COVID-like illness hospital admissions, mortality rate and case positivity rate over a 28-day monitoring period, must “hold steady.”

Gov. JB Pritzker said all regions of the state will move to the bridge phase and beyond as one, rather than individually.

The state also updated current Phase 4 mitigations so that anyone with proof of full vaccination or a negative COVID-19 test 1-3 days prior to an event or outing do not count against capacity limits.

The bridge phase will include higher capacity limits at places like museums, zoos and spectator events and increased business operations, according to the governor’s office.

The largest increase is to social events, which can allow 250 people indoors and 500 outdoors. Previously those were capped at 50 people.

Recreation activities are allowed with groups up to 100 or 50 percent of capacity indoors, while outdoor recreation is limited to groups of 100, with multiple groups allowed at the same site.

Ticketed recreation events are allowed to hold 60 percent of the facility’s capacity.

In the bridge phase, restaurants and bars can increase capacity from 25 percent to 30 percent, and outdoor capacity is allowed up to 50 percent for standing areas. In seating areas, parties of up to 10 are allowed to sit six feet apart.

But the state can revert back to an earlier phase if it “experiences an increasing trend” in COVID-19 transmission rates and hospitalizations over a 10-day period.

If the numbers hold steady for 28 days in the bridge phase, the state must reach a 50 percent vaccination rate for residents age 16 and over in order to enter Phase 5. Currently, about 28 percent of that population is vaccinated.

As of Thursday, the state was averaging 99,210 vaccine doses administered daily on a seven-day rolling average.

“Deliveries continue to rise and are expected to increase by millions more this spring,” Pritzker said at a news conference in Chicago. “With the increased supply, Illinois is now averaging 100,000 vaccinations a day. That’s about 1 percent of all adults in Illinois getting a shot each day, and I expect that number to continue to grow in the weeks ahead.”

“Based on current projections we expect that that number will surpass 1 million doses in April,” he said, crediting President Joe Biden’s administration.

Masks will continue to be mandatory in the state until the U.S. Centers for Disease Control and Prevention determine that they are no longer needed, the governor said.

Pritzker also said there will be “additional announcements to come” regarding other populations that will be eligible for the vaccine ahead of the April 12 expansion.