SPRINGFIELD – Lawmakers from both parties told officials from Gov. JB Pritzker’s administration on Thursday that the General Assembly should have some say in how the state spends the $7.5 billion in federal funds that Illinois expects to receive from the newly-enacted American Rescue Plan.

Those comments came during a virtual hearing of the House Revenue and Finance Committee that took place just hours after President Joe Biden signed the $1.9 trillion pandemic relief bill into law.

“I think the legislature would like a say in appropriating money, given our role,” Rep. Michael Zalewski, D-Riverside, said to the director of the Governor’s Office of Management and Budget, Alexis Sturm. “So my hope is that you could convey that to the governor’s office and we can develop a framework to work together on that.”

“I would echo the chairman’s request that the legislature be brought into the discussion with regard to the appropriation of whatever money we get from the feds,” Rep. Steve Reick, R-Woodstock, the ranking Republican on the committee, said moments later. “I know we’re not going to agree on where this money should go but I think it’s a conversation that belongs in the legislature as well.”

Thursday’s hearing coincided with the one-year anniversary of the day the World Health Organization declared coronavirus outbreak to be a global pandemic. The following day, Gov. JB Pritzker declared a statewide disaster. Over the next several days, he issued further orders closing K-12 schools, shutting down bars and restaurants, and a general “stay at home” order that effectively shut down major parts of the state’s economy.

Also around that time, Congress passed the Coronavirus Aid, Relief and Economic Security, or CARES Act, which sent roughly $3.5 billion in relief money to the state. But lawmakers generally left it up to the Pritzker administration to decide how to spend those funds.

That was due, in part, to the fact that federal rules put strict limits on how it could be spent. But it was also because the General Assembly itself all but shut down its own operations until late May when it reconvened for an abbreviated four-day session to pass some essential legislation, including a state budget.

But the state is expected to have considerably more flexibility in deciding how to spend the latest round of relief funding because much of it is intended to replace the revenue losses that state and local governments around the country suffered as a result of the pandemic.

In a separate interview Thursday, however, Illinois Comptroller Susana Mendoza said officials should not get too excited over the sudden influx of federal money.

“I think that, the first thing to keep in mind is that the majority of that money is spoken for, I do believe that,” Mendoza said. “As soon as we get that, the first thing that we should spend that stimulus money on is to pay back the money that we borrowed from the Federal Reserve for the state’s COVID and other medical expenses.” 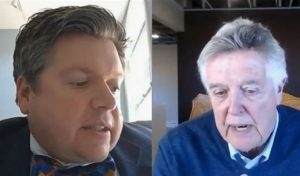 In late June, just as the previous fiscal year was coming to a close, Illinois borrowed $1.2 billion from the federal reserve to make up for the revenue losses it suffered during the initial phase of the pandemic in April and May. That money must be repaid before the end of the current fiscal year.

Later, in December, the state borrowed another $2 billion, which must be repaid over the next three fiscal years.

During Thursday’s hearing, officials from the governor’s office and the legislative Commission on Government Forecasting and Accountability updated committee members on their latest, revised revenue estimates for both the current and upcoming fiscal year. Those are estimates lawmakers will use to craft next year’s state budget.

Those officials all agreed that the state suffered a severe downturn during the first few months of the pandemic, but that the economy rebounded more quickly than expected and that the revenue losses for this fiscal year turned out not to be as bad as they had initially feared.

One factor that helped buffer state’s finances was, although there was a huge spike in unemployment, there was also a huge increase in federally-funded unemployment benefits, including an additional payment of $600 per month that ran through August. Because unemployment benefits are taxable income, the officials said, the falloff in individual income tax withholdings was not as severe as it could have been.

They also noted that retail sales tax collections have done better than expected, despite the monthslong shutdown of bars, restaurants and many retail operations, because consumers shifted their consumption patterns to online purchasing.

PHOTO: State Reps. Michael Zalewski, D-Riverside, left, and Steve Reick, R-Woodstock, argued that lawmakers should have more of a say in how the state spends the estimated $7.5 billion it expects to receive through the recently-signed American Rescue Plan. (Credit: Blueroomstream.com)