Slusser attributes the low penalty rate on the automated bidding system that the county currently utilizes, along with the high number of participating tax buyers. 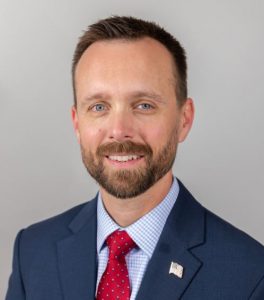 “This year we were collecting and distributing money at a consistently higher rate- which was a good sign considering COVID-19 forced many people out of work,” he said. “It’s always good to see fewer people struggling to make their property tax payments.” He also added “The lower the rate, the less it costs a taxpayer to redeem their delinquent taxes. It’s great to see the penalty rate so low this year, which benefits those whose taxes were sold.”

Each county in Illinois holds an annual Tax Sale to collect delinquent taxes which are distributed throughout their taxing districts. Illinois requires these sales, or auctions, so that taxing entities such as school districts, townships, municipalities, libraries, fire protection districts, etc. receive the money levied for that year. This year the Madison County tax sale collected nearly 3.7 million dollars of those delinquent taxes.

Slusser (shown)  said there were 33 tax buyers who took part in this years’ annual event, purchasing the taxes on 2151 parcels. He said of those sold taxes, nearly 80 percent of them were sold at a 1 percent penalty or less.

This year’s automated sale was conducted on Feb 22 and consisted of delinquent 2019 real estate taxes that were due in 2020. Automated tax sales have become the most popular method of conducting a tax sale throughout the state of Illinois. These automated systems capture bids with an accuracy that would be unreachable by any other standard.