The action was a day after the U.S. House passed the bill, which allows for unemployment benefit extension through Sept. 6, $1,400 a person stimulus payments for those making up to $75,000 annually and a host of programs aimed at injecting money into the economy. 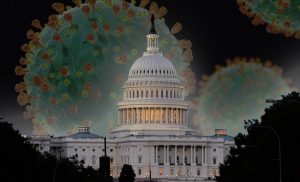 No Republican in either the House or Senate voted for the bill.

The 628-page bill is one of the biggest federal efforts ever to assist lower- and middle-income families. Included are expanded tax credits over the next year for children, child care and family leave; spending for renters, food programs and utility bills.

The bill contains hundreds of billions for COVID-19 vaccines and treatments, schools, state and local governments and ailing industries from airlines to concert halls. There is aid for farmers of color, pension systems and student borrowers, and subsidies for consumers buying health insurance and states expanding Medicaid coverage for lower earners.

Here are various reactions to the measure, which is expected to be signed by the president.

Bost said the package directed just 9 percent of the funding relief to addressing the pandemic.

“Up to this point, every piece of COVID-19 relief legislation that has been signed into law has been bipartisan, and I have supported all five,” said Bost. “But this time around, Nancy Pelosi pushed forward on her own bill without any input from congressional Republicans. Only 9 percent of the funding in this bill goes to COVID-19 relief, while the other 91 percent funded their liberal wish list in disguise. It’s critical we find real, targeted solutions to keeping our communities healthy and getting Americans back to school and work; but we must do so without breaking the bank for future generations.”

Bost previously voted for all five of the bipartisan COVID-19 packages negotiated in the House, while introducing the VA Vaccine Act Act to expand access to vaccines for veterans and supporting bipartisan efforts to provide additional vaccine distribution funding.

“I’m disappointed that President Biden and my Democratic colleagues in Congress co-opted the need for additional COVID-19 relief and used it to push their own political priorities totally unrelated to the pandemic. You know spending isn’t pandemic-related when Democrats tout this legislation as ‘the most progressive domestic legislation in a generation.’ The American people don’t need ‘progressive’ legislation. They need relief now, but that’s not what this bill does. Vast sums of the spending in this bill won’t be spent for years, and it’s not targeted at all. I support strengthening our vaccine program, helping our kids get back in school, and providing relief to those families and businesses who need it most, and it’s unfortunate Congress didn’t focus this legislation on the immediate needs of our country.

“I have great concerns that the billions of dollars the State of Illinois will receive under this bill will encourage Governor Pritzker and Democrats in the General Assembly to again kick the can on the tough budget decisions that need to be made to address our state’s longstanding fiscal problems. As it’s currently written, this legislation allows state lawmakers to use this federal money with few restrictions. Given the Democrats’ track record in Springfield, I don’t think that’s a responsible use of taxpayer dollars, particularly during a pandemic. I urge Governor Pritzker and Democratic lawmakers to use these dollars to provide direct assistance to struggling families and small businesses, and to pay for things that are explicitly pandemic-related expenses, not old borrowing and unpaid bills.

“Even before Democrats in Congress passed this nearly two trillion dollar spending plan, there already was nearly one trillion dollars in unspent federal funds from previous COVID relief legislation. It is long past time to focus our attention on making sure these dollars are spent responsibly and appropriately. American taxpayers deserve accountability for all of the money that Congress is spending on their behalf, but Democrats in Washington aren’t giving it to them.”

The CARES Act and the four other pieces of relief legislation during 2020 were negotiated and passed on a bipartisan, bicameral basis in Congress, Davis said. That includes the most recent CRRSA Act from December that still has billions to be distributed for vaccines and schools. Davis joined a group of lawmakers who recently called on President Biden to negotiate a bipartisan bill.

When it comes to direct payments Davis voted for the CASH Act of 2020 which passed the House on December 28th to increase the recovery rebate from $600 to $2,000 for each individual taxpayer and eligible dependents.

The additional money for schools is structured in a way that only 5 percent of those funds will be spent in 2021. Meanwhile $68 billion for schools passed in December has yet to be distributed. Likewise, relief for small businesses via the popular Paycheck Protection Program to the tune of $160 billion remains untapped. The bill also includes an exorbitant $350 billion allocation to state and local governments on expenses with few restrictions, Coronavirus-related or not, Davis said.

The “American Rescue Plan” passed the U.S. House on Wednesday, 220-211, largely along party lines. No Republicans voted in favor of the bill while only one Democrat voted against it. The White House has indicated that Biden plans to sign the bill Friday.

The bill includes direct payments of up to $1,400 for most Americans, which people should receive by the end of the month. But it also includes aid for state and local governments that suffered massive revenue losses after much of the U.S. economy was shut down last spring due to the COVID-19 pandemic.

According to U.S. Sens. Dick Durbin and Tammy Duckworth, both Democrats, the bill will send $7.5 billion directly to the state of Illinois. It also provides another $5.5 billion for city and county governments in the state as well as another $5 billion for Illinois K-12 schools.

“I am grateful to Senators Durbin, Duckworth, and our congressional delegation for making sure Congress took bold, swift action,” Illinois House Speaker Emanuel “Chris” Welch, D-Hillside, said in a statement. “Once guidelines are issued by federal authorities, I look forward to working with the Pritzker administration and our budget leaders on how to best appropriate these funds so they meet the needs of our most vulnerable communities. While I know the road to recovery will not be easy, this bill gives us the funds necessary to simultaneously address this health and economic crisis.”

The current fiscal year’s budget, which lawmakers passed in May, was based on the assumption that Congress would pass a relief package for state and local governments and that Illinois voters in November would approve Gov. JB Pritzker’s proposed constitutional amendment to allow for a graduated income tax.

But the tax amendment failed at the polls, and congressional Republicans, who held a majority in the U.S. Senate until the 2020 elections, firmly opposed providing fiscal aid to state and local governments. Those factors combined put the state’s budget out of balance by roughly $4.9 billion.

The state has since closed that gap, in part by borrowing $2 billion from the Federal Reserve in December and in part because last year’s tax filing deadline was pushed back from April 15 to July 15. But the state’s economy has also recovered faster than expected and on Tuesday, the Commission on Government Forecasting and Accountability revised its estimate of base revenues upward by nearly $2.9 billion, enough to close what had been a projected deficit.

“This financial relief is needed in Illinois to pay back billions of dollars we borrowed from the Federal Reserve that allowed us to cover the state’s health care bills as we fight our way through this pandemic,” Illinois Comptroller Susana Mendoza said in a statement, noting that the state still faces considerable economic challenges due to the pandemic.

“Restaurants and hotels were closed and not paying sales taxes,” she added. “Employees were laid off. Not only were they not earning a paycheck and not paying personal income taxes to the state, people who’d never sought unemployment benefits had to file for the first time and avail themselves of other state services. The state had less money coming in and more demand for services. It was a double whammy to the people and to the state budget, and it will take years to recover.”

“The funds Illinois is receiving will help us distribute vaccines, support local health departments, safely reopen schools and provide direct relief to the hardest hit families,” he said in a statement. “This package gets us one step closer to ending the pandemic and addressing the economic pain it caused.”

Republicans in Illinois’ congressional delegation, however, remained critical of the package. U.S. Rep. Mike Bost, of Murphysboro, issued a statement saying Democrats should have worked harder to find bipartisan consensus.

“Up to this point, every piece of COVID-19 relief legislation that has been signed into law has been bipartisan, and I have supported all five,” he said. “But this time around, (U.S. House Speaker) Nancy Pelosi pushed forward on her own bill without any input from congressional Republicans.”