SPRINGFIELD – The Illinois House Human Services Committee advanced two bills Tuesday, one allowing special needs students to stay with a school program past their 22nd birthday and another allowing the use of certain federal nutrition benefits to purchase feminine hygiene products.

House Bill 40, introduced by Rep. Frances Hurley, D-Chicago, would allow special needs students to receive special education services through the end of the school year that they turn 22 years of age. 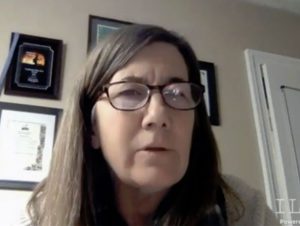 Under current state statute, special needs students can be removed from special education programs as soon as they hit their 22nd birthday. Hurley said the bill would be key to beginning to increase equity for special needs students that can already be left behind by a state system not properly equipped to support them.

“I don’t think they should be punished for their birthdate,” Hurley (shown) said.

Hurley said the issue was brought up to her by her neighbor, Katie Kettering. Kettering’s 23-year-old son Charlie, who has down syndrome, was removed from his school special needs program in November 2019 after reaching his 22nd birthday.

Kettering, who testified before the committee, said the bill would allow students like her son to be able to have an easier transition to adult special needs services.

“I just feel that our kids should just be allowed to finish the school year. Once they start something, let them finish it,” Kettering told the committee. “Our kids have a hard enough time as it is, and the one thing that’s constant in their life is school.”

Kettering said that she struggled to find a new program for Charlie after he was removed from school, a problem which was exacerbated by the onset of the COVID-19 pandemic in early 2020.

Josh Long, principal of the Southside Occupational Academy, said the bill would “correct a historic inequity” for special needs students.

“These students stay in school until the day before their 22nd birthday,” Long told the committee. “And when they’re done, the bus stops coming. No more public school. No more resources. And most of the time, this happens during the school year just like Katie said on some random day that makes little sense to the students.”

Opponents of the bill said it could cost up to $20 million more than the status quo for the state and school districts that will be required to provide an extra year of services. They also cited concerns over staffing levels at schools.

Peg Agnos, legislative director for the South Cooperative Organization for Public Education, told the committee that while the bill was an important first step toward improving equity for special needs students in the state, more discussions are needed in order to address the relative lack of special needs support programs for young adults.

“There is no question that we have a gap problem between when students complete high school programs and when they are able to receive services in adult programs,” Agnos said.

Agnos also raised concerns over current state standards for special education licensure and Medicaid eligibility that would need to be changed in order to reflect the new parameters of HB 40.

Agnos said HB 40 could be a short-term fix as discussions on providing adult care for people with special needs continue.

“We have to provide a smooth and integrated transition between high school and adult programs from a student’s perspective, there should be very little difference between their last day in school and their first day in an adult program,” Agnos said.

The bill passed the committee with one vote against from Rep. Tom Demmer, R-Dixon, who cited concerns over funding.

The second bill moved by the committee, House Bill 155, was introduced by Rep. Barbara Hernandez, D-Aurora.

It would allow residents to use federal Supplemental Nutrition Assistance Program and Women Infants and Children benefits to purchase menstrual hygiene products. The bill would also make federal Temporary Assistance for Needy Families funding available for the purchase of feminine products as well.

“This legislation aims to address the issues of period poverty and expand access to feminine hygiene products for low income individuals,” Hernandez told the committee.

After a short discussion over whether the bill would overlap with existing provisions in Illinois public aid benefits, the bill passed unanimously.

Demmer noted that the bill would require a waiver from the federal government for the program to take effect in regard to the usage SNAP and WIC funds.