Call for investigation into Rep. Chris Miller’s actions that day

SPRINGFIELD — Nearly three dozen Democratic members of the Illinois House of Representatives signed onto a resolution Monday to “condemn” a southern Illinois Republican lawmaker for attending a Jan. 6 rally in Washington, D.C., that preceded the violent riot at the U.S. Capitol. 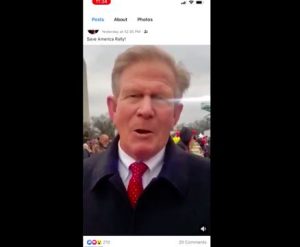 The Legislative Inspector General is responsible for investigating complaints of violations of any law, rule, or abuse of authority or other forms of misconduct by members of the General Assembly.

“Supporting and participating in insurrection against the government is way beyond the pale and violates our oath of office,” Rep. Bob Morgan, D-Deerfield, wrote in an email Tuesday to Capitol News Illinois. “The State of Illinois deserves to know what role Rep. Miller had in the riot of January 6 in Washington, D.C., and that is why I referred this matter to the Legislative Inspector General for proper investigation.”

IMAGE ABOVE: Rep. Chris Miller, R-Oakland, appears on video at the Washington, D.C. rally on Jan. 6. His attendance at the rally has led his colleagues in the Illinois General Assembly to draft a resolution condemning him and calling for investigations into his actions that day. The video was deleted from Miller’s Facebook account, but was preserved online, including by WCIA-TV reporter Mark Maxwell. Pictured is a screenshot from the video.

The House resolution was co-sponsored by 33 House Democrats as of Tuesday, including House Speaker Emanuel “Chris” Welch, of Hillside; Speaker Pro Tempore Jehan Gordon-Booth, of Peoria; and Majority Leader Greg Harris, of Chicago.

The resolution also criticizes Miller for allegedly adorning his truck with decal for an anti-government militia group, known as “The Three Percenters.”

The resolution and calls to investigate Miller are in response to the GOP lawmaker’s publicized attendance at the Jan. 6 rally where former President Donald Trump spoke before the crowd stormed the Capitol, resulting in five deaths.

In a video taken that day and posted on Facebook, Miller appears with the Washington Monument in the background and says he’s at the “Save America Rally” in Washington, D.C.

“I think it’s important to know we are engaged in a great cultural war to see which worldview will survive, whether we will remain a free people under free market capitalism or whether they will put us under the tyranny of socialism, communism and the dangerous Democrat terrorists that are trying to destroy our country,” Miller said in the video.

The video was preserved online, although Miller deleted his social media posts from that day.

Miller, 66, did not respond to requests for comment on Tuesday.

The House resolution claims that Miller violated his oaths to the U.S. and Illinois constitutions by “actively and publicly promoting the actions of an internationally recognized para-military hate group,” for having a decal representing The Three Percenters.

Miller has denied being a member of The Three Percenters, and stated he removed the sticker from his truck, according to news reports.

The resolution also claims Miller “through his continued actions and instigations, has created an environment that potentially threatens not only the sanctity of the Illinois General Assembly but also the safety of the members and their staff.”

Miller, who was first elected to the General Assembly in November 2018, serves House District 110, which covers a swath of southeastern Illinois and borders Indiana.

The third-generation farmer who raises cattle was reelected in November 2020.

His wife, U.S. Congresswoman Rep. Mary Miller (R-IL), also came under scrutiny when a video began circulating of the Congresswoman stating: “Hitler was right about one thing. He said, ‘Whoever has the youth has the future.’ Our children are being propagandized.”