The William M. BeDell Achievement and Resource Center in Wood River  celebrated the retirement of Cynthia Lefferson on Friday, Feb. 26.

Lefferson began working for the agency in 1976 as a teacher in the School Program, which serves children with developmental disabilities throughout Madison County, ages 3 through 21.  In 1982, Lefferson was offered the position of principal.  She declined but accepted another important role within the agency as a case coordinator serving adults and parents of children with developmental disabilities.  She appreciated the experience because she gained perspective about the challenges of having children with disabilities.  In 1992, she returned to teaching. 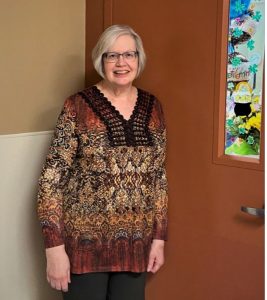 Lefferson said, “When I was 16, I volunteered for a camp for special needs kids and I knew then that was what I wanted to do.”  Lefferson has worked with all age groups and has enjoyed them all, and noted that each child requires completely different accommodations.  Throughout her career, there have been new techniques and therapies developed to assist the disabled and she has enjoyed using new strategies to better serve the children.  She added, “There were kids that I thought would never walk or talk, and it’s been wonderful to be part of their progression.”

The Achievement and Resource Center, which is referred to as “arc,” was formed in 1957 by a group of parents of children with developmental disabilities.  The organization began operations in a church basement and later moved to a school in East Alton.  In the early 1980’s, the agency moved to a building donated by the American Oil Co. in Wood River.  The school operated in the basement of that building until 2014 when a new school was constructed.  The new facility enabled the School Program to expand and provide additional support services and therapies.

Lefferson added, “When I started at arc, I was the only teacher working in a church basement.  It was very exciting to move into the new school in 2014.”  The School Program now employs eight teachers and a total of 37 employees including aides, therapists, a nurse and administrators.  She continued,  “The agency and I grew up together.”

Lefferson’s philosophy on teaching children with developmental disabilities is to see each child as a person and not as a disability, never forgetting they are someone’s child and to treat that child as she would her own.  Her empathy towards the families inspired her to do everything possible to follow their recommendations in the classroom.  She said, “The parents are the best resources and I learned not to be judgmental about their wishes because I will never know what it’s like to parent a child with special needs.”  She also commended arc for maintaining a good board of directors and good program directors who were very focused on the best ways to serve the individuals.

Executive Director Chad Rollins said, “The agency and the school will miss Cindy’s leadership and dedication to the students we serve.”

In addition to being a teacher, Lefferson volunteered for the Special Olympics throughout her career.  Lefferson and her husband, Mike, have three children and three grandchildren.

The William M. BeDell Achievement and Resource Center is a non-profit organization serving individuals with developmental disabilities throughout Madison County.  Over 500 children and adults are served through the School Program, the Family Support Unit, the Community Day Services Program, the Residential Program and the Respite Program.

For more information about The William M. BeDell Achievement and Resource Center, call (618) 251-2175 or visit www.bedellarc.org.