Former speaker will retire with a pension worth $2.9 million after contributing just $350,000

Analysis by the nonpartisan Illinois Policy Institute found Madigan’s recent retirement means he will receive $70,900 in pension benefits from the General Assembly Retirement System over the rest of 2021, with the benefit more than doubling to $151,500 in July 2022.

A special perk that was eliminated for new elected officials after 2002 allows lawmakers to “bank” 3 percent cost-of-living increases while still working for each year of service after 20 years or age 55, whichever comes first. Madigan “banked” credit for 25 cost-of-living boosts. 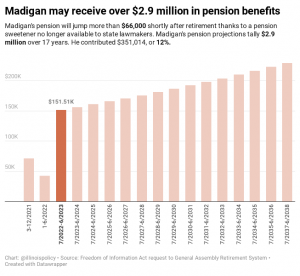 •           The former House speaker is projected to collect more than $2.9 billion in lifetime pension benefits, assuming he collects his pension for 17 years total. He contributed just 12 percent of his total expected payout.

•           The system he will draw from, GARS, is the worst-funded of the state’s five public pension systems with just 17 percent of what it is expected to pay out.

“Former Speaker Madigan will receive immense personal gain from a broken pension system he was instrumental in creating. For the past 30 years, he was involved in every bill that enhanced pension benefits, borrowed money to cover their costs, or shorted contributions to the systems.

“The current state of the pension system prioritizes retirement benefits over public services for those in need, while also putting retirees at risk of insolvency. The end of Madigan’s reign as speaker and a lawmaker presents an opportunity to undue his legacies of debt and corruption by fixing the pension system through a ‘hold harmless’ constitutional amendment.”