Editor’s note: This posting has been updated to add a second story, further down, from Capitol News Illinois.

Springfield businessman and lawyer becomes the first downstate chairman since 1988

On Saturday, Feb. 6, after lengthy interviews with three finalists, what was called a “spirited discussion,” and a weighted vote among the Illinois GOP State Central Committee, Don Tracy of Springfield was unanimously chosen as the next chairman of the Illinois Republican Party.

Tim Schneider immediately offered his resignation and Tracy accepted the role of chairman to fill the remaining two years of Schneider’s term.

In December, outgoing Illinois Republican Party Chairman Schneider announced the transition plan would be an open and transparent process for the selection of a new chairman.

Tracy released the following statement in response to his selection:

“I am truly honored and excited to have been chosen by the State Central Committee to serve as Chairman of the Illinois Republican Party. I want to thank each member for the opportunity to serve. I promise to lead with honesty, integrity, and the vigor we need to turn Illinois around. I also want to thank the other two finalists – Mark Shaw and Scott Gryder – for their tireless work on behalf of the Republican Party. I look forward to working with them to elect more Republicans. 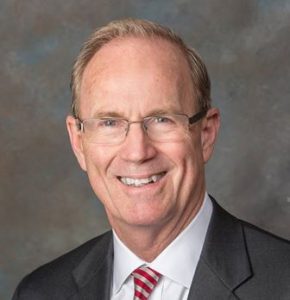 “I ran for this position because I love Illinois – it’s my home – and I believe the ILGOP can be a tremendous catalyst for change in this state. The upcoming election cycle can be monumental if we seize on the tremendous opportunities before us. We have a weakened Governor who can be defeated; we have a US Senate seat to win; we are well-positioned to win back Congressional seats; we can claw back seats in the state legislature if we recruit the right candidates; and lastly, we have an historic opportunity to elect a fourth Republican to the state Supreme Court for the first time ever.

“The only way we can capitalize on these opportunities in 2022 is if we unite the party. My number one priority is to give every Republican a seat at the table and give every Republican a voice. Regardless of our differences, Republicans are the only hope for turning Illinois around and keeping it from becoming a depopulated, over-taxed, and anti-police financial basket case. There’s too much at stake in 2022 to be anything less than a united band of brothers and sisters in the fight to save Illinois.

“So, whatever your political leanings, wherever you live – if you want to fight corruption, restore fiscal sanity, grow our economy, and stand for law and order – you’re on our team. It’s time to suit up, work together, and bring home some wins for the people of Illinois.”

Tracy is a successful businessman and lawyer from Springfield. Born and raised in rural Mount Sterling (Brown County), he is the oldest of 12 children. He and his 11 siblings own the family business, Dot Foods, Inc., a national redistributor of food and related products, and other national businesses. Headquartered in Mount Sterling (population: 2,025), Dot Foods, Inc. was founded in 1960 by Don’s father and currently employs 6,000 people across the United States and Canada.

Tracy is the first chairman of the Illinois Republican Party from outside Chicago and the collar counties since 1988.

Tracy, a partner in the firm Brown Hay and Stephens, also served as chairman of the Illinois Gaming Board during former Gov. Bruce Rauner’s administration.

“I ran for this position because I love Illinois – it’s my home – and I believe the ILGOP can be a tremendous catalyst for change in this state,” Tracy said in a statement after the election. “The upcoming election cycle can be monumental if we seize on the tremendous opportunities before us.”

Tracy was chosen over two other candidates, Mark Shaw, who is the Lake County GOP Chairman and president of the Illinois Republican County Chairman’s Association, and Scott Gryder, the Kendall County Board Chairman. Tracy is also the first party chairman since 1988 who is not from Chicago or the collar counties.

He now faces the challenge of unifying the state party organization, where divisions have erupted over the impeachment of former President Donald Trump.

U.S. Rep. Adam Kinzinger, of Channahon, was one of 10 Republicans in the House to vote in favor of impeaching Trump during his final days in office on a charge of inciting the Jan. 6 insurrection at the Capitol, prompting dozens of GOP county party chairmen in southern Illinois to issue a statement condemning his actions.

On Thursday, two days before the chairmanship election, the state party issued a statement saying that while it strongly disagreed with Kinzinger and other Republicans who voted for impeachment, “we will let the voters be the arbiters of any vote taken by an elected official.”

“The stakes of the 2022 election here in Illinois – defeating Gov. JB Pritzker and Sen. Tammy Duckworth, winning back congressional seats, and electing Republican judges to the Illinois Supreme Court – are too monumental to engage in a circular firing squad,” the statement read.

“Illinoisans have had enough of the Democrats’ destructive policies in Springfield, and I know Don’s conservative leadership will help put the GOP on a path to help fix the many challenges our state faces,” Bost said in a statement. “I am excited to work with Don and unite our party for victory in 2022!”

Tracy served as chairman from February 2015 until June 2019 when he resigned following an Office of Executive Inspector General’s report that found he had engaged in improper political activity by making several campaign contributions while serving on the board, in violation of the Riverboat Gambling Act.

“The Illinois GOP has deemed Don Tracy, a Trump supporter who resigned as the Illinois Gaming Board chair after steering illegal contributions to former Governor Rauner’s campaign, as their best hope to carry their party into the future,” Democratic Party of Illinois executive director Mary Morrissey said in a statement. “It will be interesting to see if the Illinois Republican Party will continue to embrace questionable leadership, division and extremism or consider working with Democrats to find solutions that lift up workers and families across Illinois. We aren’t holding our breath.”

“Ms. Morrissey’s statement is rich given that the Chairman of the Democratic Party of Illinois is Mike Madigan, the most corrupt politician in America,” Hackler said in an email statement. “Don Tracy looks forward to uniting the Republican Party in Illinois around a positive agenda of reform: ending corruption, restoring fiscal sanity, growing our economy, and standing for law and order.”