Vicki Thomas, who retired last week as head of the Joint Committee on Administrative Rules , has occasionally been asked what it feels like being the most powerful person in Illinois state government.

She’s heard of JCAR referred to as “obscure but powerful,” and she knows the organization is “a place where the entirety of state government flows through,” as she puts it.

Still, this question evokes her laughter. 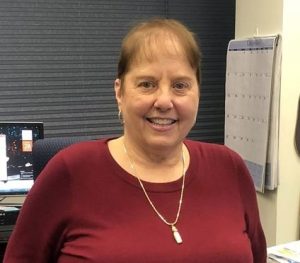 “I’m not powerful,” Thomas said in an interview, conducted as she was preparing to leave. “JCAR can be powerful. I’m the temporary custodian of this desk.”

Thomas, 70, has spent 47 years working under the dome, starting out as a staff intern for the Senate Democrats before leading JCAR – where she has served as the caretaker of the administrative rulemaking process for nearly three decades.

Once the governor signs a bill into law, JCAR’s work begins, she said.

The bipartisan 12-person committee, formed in 1977, consists of lawmakers from both the House and Senate. It is one of eight legislative support services, which include the Commission on Government Forecasting and Accountability, Legislative Printing Unit and Legislative Inspector General.

JCAR accepts public input and works with state agencies, like the Department of Public Health, to help write detailed rules to carry out statutes passed by the General Assembly.

“It’s all about, here’s the four big strokes that were put into the statute, and then watching an agency formulate the other 50 strokes that it takes to make something actually happen,” she said of the rulemaking process. “And our main job is making sure that the decisions an agency makes are within the parameters that the General Assembly set. First of all, does anything in that rulemaking violate statute? That’s the number one thing we’re looking for.”

JCAR also helps agencies draft rules to carry out a governor’s executive orders — a task that has been magnified amid a flurry of executive orders signed by Gov. JB Pritzker since the COVID-19 pandemic began.

“My goal is that the administrative law written for the state of Illinois is the best possible that it can be at this time,” she said.

For Thomas, that means the rules are written as clearly and fairly as possible, and they provide equal treatment and due process for every person.

Amid the pandemic, Thomas said she has been feeling like she is “on overload” since March 15.

The executive order “establishes what the basic policy is. But then an agency has got to implement them through rules. …. So, from the very beginning, we’ve had a crush of emergency rules.”

In “normal times,” Thomas said, there are sometimes up to 10 or 12 outstanding emergency rules, but that number is more often around six or seven.

“There were times during COVID we had 126 emergency rules afloat at the same time. So there was the bulk of it, and then it was the fact that agencies sought a lot of guidance on how far they could go….And we would give them feedback on that,” she said. “We’d help them if what they wanted to do wasn’t all right. We’d help them find some way to get the job accomplished that was all right, and was going to hold up legally.”

Thomas is only the second executive director of JCAR since the organization was created.

After graduating with a journalism degree from Southern Illinois University-Carbondale, she began her career as an intern with the Senate Democrats in 1972 through the Illinois Legislative Staff Internship Program, and was hired as a full-time staffer with the caucus by July 1973.

Thomas said she began work with the Senate Democrats when the state’s Environmental Protection Act, effective in 1972, was “really new,” so much of her time was focused on environmental issues.

In this role, she toured nuclear power plants with legislators and other staffers to look for ways to get rid of nuclear waste.

“I actually did some out-of-state touring with a group, called then the (U.S.) Atomic Energy Commission, later on Nuclear Regulatory Commission, to big, federal radioactive waste sites around the country,” she said. “And it was just to see what the problems were in storing.”

The discussion went on for a number of years, but ultimately, “the plants had to keep it on site a long time because there were not places to get rid of it,” she said.

She was a substantive staff director for the Senate Democrats, working for three Senate Presidents — first for Cecil Partee, the first Black Senate president in Illinois, then Thomas Hynes and Philip Rock — before joining JCAR as executive director in 1992.

She said at that time she was told by her chief of staff that Rock had recommended her for the job at JCAR.

“I did respect Sen. Rock’s judgment a lot,” she said. “He told me the reasons (he considered me) were that I was capable of taking a broad view of issues. I wasn’t just entrenched into the politics. It was a bipartisan group that worked on the policy issues after they left the General Assembly.”

Thomas said it was difficult to leave her job with the Senate Democrats, but “it didn’t take long at all for me to really grasp, not only how important what this group does is, but how fun it can be to work there.”

As executive director for JCAR, Thomas rubbed elbows with President Barack Obama — when he was a state Senator who served on JCAR — and she testified during Gov. Rod Blagojevich’s impeachment trial about when his administration tried to sideline JCAR in implementing a state health insurance program.

In her time there, she said she overhauled the way staff provides analysis to lawmakers.

“They were writing volumes of material that no legislator could absorb in the time they had available,” she said. “We got it down two or three pages, telling the legislator…just the bottom line things that they needed to know.”

That innovation, she said, “focused the group a little bit more again on its purpose of serving the General Assembly.”

“We try hard not to be too bureaucratic, even in our work style, here. We do a lot of collaborative work, a lot of group work. I put up an idea, and I’m just waiting to see what holes people can punch in it. I invite them to punch holes in it.”

Kimberly Schultz, an assistant general counsel at the Department of Healthcare and Family Services, will succeed Thomas starting next week. Schultz was a policy and budget analyst for the Senate Democrats from 2009 to 2013.