The broker tasked with finding a buyer for the idle Lindenwood University campus in Belleville said the uniqueness of the property is drawing interest, but no deals are imminent.

Mark McNulty, vice president of CRBE, of St. Louis, said the 16-building property in the 2600 block of West Main St. will be sold in one piece if the right buyer can be found, with individual components of the campus drawing more attention than others.

The asking price is $10 million for the 31-acre site, which is the former home of Belleville West High School. Lindenwood bought the property in 2003 for $1 but consolidated most of its operations back to its main campus in St. Charles, Mo., starting in May 2019.

“We’ve got a total of 339,330 square feet of buildings, some of which are architecturally significant,” McNulty said. The oldest buildings were designed in the 1920s by William Ittner, a world-renown architect and designer of school facilities, from St. Louis.

The main hall and 900-seat auditorium/theater are among the significant structures.

“This is a unique opportunity, and the buildings and property have been maintained,” McNulty said. “We have had interest from a number of different users, but it’s large and that’s been the biggest issue — simply the size of the campus.”

After Ittner’s initial main hall was built, other buildings were added over time, the last of which were two dorms added by Lindenwood. 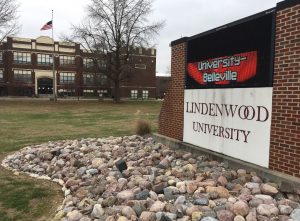 The potential to sell off the property piecemeal has been discussed, but it’s not necessarily preferred, McNulty said.

“The goal is to sell the campus as a whole. We do have a number of users who have expressed interest in parts of the campus.”

Among targeted users are educational institutions, including universities, colleges or trade schools; churches or religious institutions; hotels; and multifamily neighborhood.

CRBE has had the listing on the property for around nine months.

“This one gets more hits than any other listing I have,” McNulty said.

Although it would be best suited for educational uses, one appealing aspect of the property is a significant amount of lab space in the main hall.

“It’s ready to go, and we have found some potential users who recognize that,” he said. “It’s new lab space, so you could do things with forensics studies or any sort of use that requires a laboratory.”

It’s quite expensive to reproduce such space from scratch, he said.

Other potential institutional users are interested in the classroom space.

One option is to find multiple users who would commit to space and put them together with a developer who would buy the property, he said. Long-term leases would be used in such a scenario.

Another plausible idea discussed is converting the dorm space for senior housing.

The property includes the main hall, which has the laboratory space, and is the oldest building on campus; the theater building, complete with an extension that Lindenwood had built for community congregating; an arena; administrative and office buildings; a fitness center; stadium; and tennis complex, among several others.

Most recently, Lindenwood has had only night campuses on the property, and there are security people present but otherwise the property is sitting idle.

The property is being well-maintained in the interim, he said. A new roof was recently added to one building.

There also have been several organized tours.

“The people who walked through it have been very impressed with the layout and the feel of the campus. The biggest hurdle has been finding a user who needs all the buildings.”

“There’s a lot of interest in the campus, you just have to be able to put the parties together.”

The ultimate decision on selling would have to be made by the Lindenwood board, he said.

In 2003, Lindenwood University’s board of directors approved a three-way partnership with the City of Belleville and Belleville District 201 allowing the university to purchase the historic campus of Belleville West High School and turn it into a satellite campus.

Lindenwood agreed to purchase the campus for $1 and invested at least $25 million in improvements, according to reports. The city of Belleville agreed to contribute $150,000 annually in tax increment financing to the project, as well as $300,000 earmarked toward asbestos abatement.

This story can be found in the February print edition of the Illinois Business Journal. For more of our print edition, go to the Current Edition link at ibjonline.com