Illinois saw its worst year for jobs on record, according to analysis from the Illinois Policy Institute.

Recent data shows Illinois lost 423,300 jobs in total from December 2019 to December 2020, or about a 6.9 percent decrease. Leisure and hospitality sector jobs were hurt the most during the year, down 198,100 jobs, or 31.7 percent. That job sector experienced nearly half of all job losses in the state during 2020.

Every sector in the state economy saw a decline over the year, except for construction employment which rebounded in December 2020.

According to new Illinois Department of Employment Security data, Illinois lost 2,500 jobs from mid-November to mid-December, marking the second consecutive month of job losses for the state.

Hardest hit was the leisure and hospitality sector, which lost 40,900 jobs during the first full month of the reinstated ban on indoor dining. The only other sectors of the economy that shed jobs were the information sector with 1,300 job losses and “other services” with 800 job losses.

The national economy also stalled in December, shedding 140,000 total jobs. It was the first month of national job losses since April.

“Illinois business owners and job seekers experienced a tough 2020, with many losing their jobs or giving up on finding work. And December marked a particularly rough month for those in the hospitality and leisure industry with Illinois’ mitigation protocols in place. 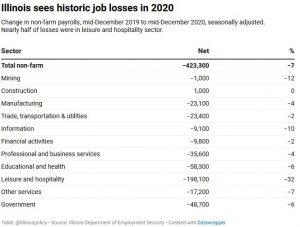 “As Illinois enters a new year with renewed hope for the jobs climate, the best path forward for the state would come from constitutional pension reform. Instead, Gov. J.B. Pritzker is  asking for tax increases and to remove a small business tax credit that could take as much as $1 billion from our job creators. Pension reform could accomplish the state fiscal goals that tax hikes have failed to deliver and offer our economy a sustainable recovery instead of more job losses.”

To read more about the economic impacts of the COVID-19 pandemic on Illinois jobs, visit: illin.is/covidjobless.