All 11 regions have now moved out of Tier 3 mitigations.  If metrics continue to improve or are stable, regions 10 and 11 are on track to advance to Tier 1 on Saturday, January 23, 2021.  Information about which tier and phase regions are in can be found at the top of the IDPH website homepage.

Indoor dining is not allowed until a region moves into Tier 1, at which point it is permitted at 25 percent capacity. Drinks can be served in Tier 1 as long as food is served.

Museums and casinos can reopen in Tier 2, as can indoor fitness classes, according to state guidance.

Here is what is called for under Tier 2 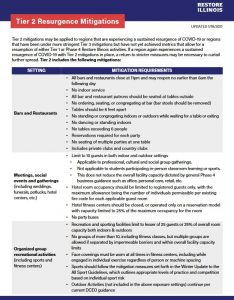 “With all regions of Illinois now out of Tier 3, we can now see that the entire state is headed down the right path,” said IDPH Director Dr. Ngozi Ezike.  “During the summer, we were on this same path.  We know that we must continue to take precautions and be smart about how we relax some of the mitigation measures, which are in place to protect our health and safety.”

“We are pleased to hear our region as whole is trending in the right direction,” said St. Clair County Board Chairman Mark Kern.  “We will continue to advocate to our residents to mask up, wash their hands, and stay safe so we can continue to increase capacity at our hospitals and reduce our positivity rates.  We appreciate the work and partnership of IDPH and Governor Pritzker.”

IDPH will continue to closely monitor test positivity, ICU bed availability, and the number of people in the hospital with COVID-19.  Should data show regions trending in the wrong direction, based on the established mitigation metrics, regions could once again find themselves in a higher tier with increase measures.

Metrics for moving from a higher to lower tier are as follows:

Information about mitigation and resurgence metrics can be found on the IDPH website at http://www.dph.illinois.gov/regionmetrics.

HERE IS OUR EARLIER STORY

SPRINGFIELD – Only one of the state’s 11 COVID-19 mitigation regions remains at the highest level of restricted activity Thursday as the statewide case positivity rate continues to decline.

That’s the Metro East, known as Region 4 on the state’s mitigation map. According to Illinois Department of Public Health, if all positivity trends continue, Region 4, could move to Tier 2 beginning Friday.

The Illinois Department of Public Health announced Thursday that Region 7, which includes Will and Kankakee counties, was moved to Tier 1 mitigations, while Region 6 in east-central Illinois moved back to base Phase 4 guidelines.

That left only Region 4 in the Metro East region in the strictest Tier 3 mitigations.

Regions can move downward if test positivity rates meet certain levels, hospitalizations for COVID-19 decrease for at least seven of 10 days and at least 20 percent of hospital and intensive care beds remain unoccupied.

The announcement of the latest tier movements came as the state’s seven-day rolling average case positivity rate dropped to 5.4 percent, marking 13 days in a row it has decreased, hitting a low since Oct. 19.

The state also reported another 123 COVID-19-related deaths, which are considered a lagging indicator of disease spread. That brought the death toll to 18,520 since the pandemic first arrived in Illinois.

That’s out of more than 1 million confirmed or probable cases and 15 million test results reported.

“One year and one day since the first known COVID-19 case was identified in the United States, I’m incredibly heartened to see the Biden-Harris administration step up to the herculean task of providing a truly cohesive, prepared, robust national response to COVID-19 that saves lives, protects our healthcare workers, supports small businesses, gets children back into schools, and promises the economic recovery Americans deserve,” Pritzker, who often criticized the Trump administration for a lack of cohesive pandemic response, said in a statement Thursday.

Biden announced plans to sign a number of executive orders aimed at combatting the pandemic in his first days in office, ranging from masking requirements on federal property to invoking the Defense Production Act to coordinate the federal government’s efforts to “produce, supply, and distribute personal protective equipment, vaccines, tests, and other supplies for the nation’s COVID-19 response.”

That act allows presidents to compel domestic industries “to expedite and expand the supply of materials and services,” such as vaccine materials or personal protective equipment, “from the U.S. industrial base needed to promote the national defense.”

The state has received more than 1.4 million doses of COVID-19 vaccines, with just over 900,000 delivered to providers and 524,050 allocated as part of the federal government’s pharmacy partnership program to vaccinate long-term care residents.

Of those, 572,389 doses have been administered, 90,752 of which were part of the long-term care effort. Administrators reported 34,649 vaccines administered on Wednesday alone.