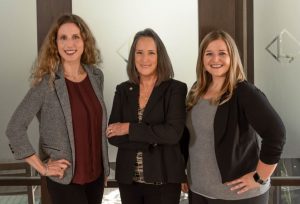 Founding President and CEO Jane Louer has put the wheels in motion for a gradual buyout and leadership transition to two of the company’s key employees, Yvette Paris and April Grapperhaus. The initial phase of the employee purchase has been completed and the company welcomed the new owner/partners. Louer remains majority stockholder but her ownership will be reduced each year for the next three years, when Paris will become majority stockholder.

Paris, NCIDQ, LEED AP, the firm’s longtime design director, is assuming the role of vice president/design director and shareholder. Paris has been with the company for 15 years.

Grapperhaus, former office manager for seven years, now holds the title of director of operations and is also a shareholder in the firm.

Louer said the company began in 1996 when the she was motivated to start her own company where she could be in full control of its direction and mission. She saw a definable need in the commercial interiors industry for the integration of interior design, furniture and construction to deliver a seamless project delivery method for for creating and fulfilling interior space needs and workplace efficiency.

At the time that Louer started her career, there were few women working in the architecture, engineering and construction industry. After spending a few years working for design/build contractors in St. Louis, Louer was hired in 1980 by The Korte Company to launch the firm’s interior design and furniture group. In 1984, she became the company’s first female vice president. Louer’s passion for designing, furnishing and construction of the entire interior space for commercial clients in the corporate, financial, government and healthcare industry was evident.

A decade after Louer incorporated in 1996, she recruited Paris.

“Yvette has truly shaped the company,” said Louer. “She is responsible for new hires, training and directing the path of Louer Facility Planning. Yvette’s creative talents, her dedication to detail and her level of unrelenting customer service has enabled us to retain wonderful clients over the past decade and a half.”

Paris says she has learned a great deal from Louer and is grateful to have had her as mentor.

“In order for people to grow, they have to be able to grow through and up to the task at hand,” Paris said. “I’m thankful to have had this opportunity to learn an incredible amount from Jane since 2006. And I’m excited for this new chapter and all the future holds.”

Seven years after hiring Paris, Louer brought Grapperhaus on board. “April is adept at following each project diligently and multitasking with ease,” said Louer. “As our firm has grown and there are more and more parts and pieces to projects and to the operation of the firm overall, April works proactively and makes sure every vendor and client is attended to so projects remain on schedule.”

“I’ve had the chance to shadow Jane and learn everything from clerical to accounting, order entry, project management, client support, vendor relations and more,” Grapperhaus said. “Working for a small company has afforded all of us the opportunity to tap into Jane’s career-long industry experience and wisdom. It’s the reason we’re where we are today.”

“Having had the unique opportunity to start and build my own firm has been incredibly satisfying,” Louer said. “As we celebrate 25 years in business, we’re all celebrating a quarter of a century as the region’s go-to workplace design resource. We’re celebrating 25 years of creating ideal office landscapes that allow companies to grow and prosper.”