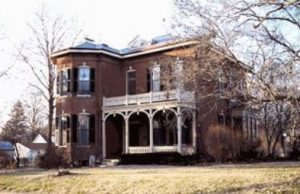 It is the Tiedemann House, 212 W. Washington St., which is already a National Historic Landmark (shown here.)
The Tiedemann House is significant for its representation of Italianate and Queen Anne architecture.

Original homeowner Ernst Tiedemann, a German immigrant, took up permanent residence in O’Fallon in 1865.  He opened the town’s largest general store and also served three terms as president of the town’s Board of Trustees.

Tiedemann hired St. Louis architect Henry Peipers, also from Germany, to design his home, which was built in 1884.   One of the key characteristics of the Italianate style is its use of the segmental arch, visible in this house over the windows, and in the decorative wooden arches between the porch columns. The porch colonnade and the house’s overall L-shaped plan are also characteristic of the style. The Queen Anne influences are found in the gabled dormer windows, the jigsaw-cut balusters on the front porch and balcony, the complex rooflines, and the etched glass on the front doors.

The Illinois Department of Natural Resources made the announcement regarding the state’s sites added to the National Register.

“Thanks to the advocacy and support of historic preservationists from throughout the state, and thanks to the work of our staff at the IDNR State Historic Preservation Office, these additions to the National Register help tell the story of Illinois,” said IDNR Director Colleen Callahan.

The places recognized are located across Illinois and include the home of the Chicago Cubs, and four historic districts that, when combined, include more than 700 significant properties.

National Register places are added to the register by the National Park Service based on recommendations from the State Historic Preservation Office.

The National Register of Historic Places is the official list of properties that merit special attention and preservation. Every county in Illinois has at least one property or historic district listed in the National Register. Together, they represent a cross section of the Prairie State’s history from its early settlement to the mid-20th century.

In general, properties must be more than 50 years old to be eligible for the National Register. A listing places no obligations on private property owners but does make properties eligible for some financial incentives.

The 2020 Illinois additions to the National Register are listed below:
COOK and COLLAR COUNTIES

Gage Park Bungalow Historic District, Cook County, Chicago
Listed March 13, 2020
During the first three decades of the 20th century, Chicago’s population doubled as an additional 1.5 million residents settled into the city. During this same period, tens of thousands of one-and-one-half story brick bungalows were built in the city’s outlying neighborhoods. Built together, many times in entire blocks to form a veritable belt around the center city, the unprecedented form of the Chicago bungalow created an entirely novel form of Chicago urbanism.  In 2004, a thematic study establishing the significance of Chicago bungalows was approved by the National Park Service.  Since then, 13 bungalow historic districts in Chicago have been listed in the National Register of Historic Places. The most recent, the Gage Park Bungalow Historic District, is located on the southwest side of Chicago, approximately seven miles from the city’s commercial center. Brick Chicago bungalows form the bulk of the district, which was largely developed between 1924 and 1927. Neighborhoods like Gage Park offered working class families the opportunity to own solid, thoughtfully designed homes and build communities within a quiet residential setting. Gage Park was an opportunity for bungalow architects and developers to promote the attributes of the functioning, well-built, yet affordable Chicago bungalow. While there was a wide range of architects, developers, builders, and ethnicities contributing to the tapestry of Gage Park, the steady, rhythmic streetscapes create a strong and consistent architectural fabric in the community.

Wrigley Field, Cook County, Chicago
Listed September 23, 2020
Wrigley Field was listed as a National Historic Landmark as one of Major League Baseball’s most venerable structures and the country’s oldest extant National League ballpark.  Built in 1914 as Weeghman Park, this ivy-studded baseball park has been home of the Chicago Cubs since 1916. Located on the city’s North Side, the park was renamed Wrigley Field in 1926 for William Wrigley Jr., who purchased the Cubs in 1921.  The baseball park is also significant in the history of professional football as the longtime playing field for the Chicago Bears. Wrigley Field is associated with Dizzy Dean, Gabby Hartnett, Babe Ruth, Ernie Banks and dozens of other baseball stars, and is also the site of Red Grange’s first professional football game, owner-coach George Halas on the sideline, the T-formation heroics of Sid Luckman, and other events associated with the Bears.

Chicago Golf Club, DuPage County, Wheaton
Listed May 29, 2020
Chicago Golf Club in Wheaton is known for having the first 18-hole golf course in the United States and one of the first championship caliber courses in the country.  As one of the five founding member clubs of the United States Golf Association (USGA), it hosted many of the early amateur and professional golf tournaments in the U.S. Chicago Golf Club, which is nationally significant for its course’s design, was first laid out in its current location by Charles Blair MacDonald, the father of American golf architecture. The course was redesigned by his protégé (and master designer in his own right) Seth Raynor in 1921-1923. Raynor utilized the same design forms and intent that he and MacDonald had established building other courses in the east when they effectively initiated golf course architecture as an art form in the U.S. The club is also recognized for its ongoing association with the sport of golf in the community and for its architecture. Notable buildings on the property include the clubhouse and lounge designed by Chicago architect Jarvis Hunt, nephew of Richard Morris Hunt.

Colby-Petersen Farm, McHenry County, McHenry
Listed March 13, 2020
The Colby-Petersen Farmstead, located just northwest of McHenry, is significant as a good architectural representation of farm buildings from the 19th and early 20th centuries. The farmhouse, built in the 1850s, is one of the oldest surviving Greek Revival structures in the township and has maintained much of its original features. The vernacular-designed oak barns and outbuildings, including two Douglas fir stave silos, are surviving representatives of late-19th and early-20th century construction techniques of Midwest farming communities.   The Farmstead was occupied by its original builders and direct descendants throughout most of its 150-year history. Since its designation as a City of McHenry Historic Landmark in 1998, the farmstead has been used to educate visitors on Illinois agricultural history.
DOWNSTATE

Champaign Downtown Commercial District, Champaign County, Champaign
Listed January 24, 2020
The Champaign Downtown Commercial District (CDCD) is significant for its history and its architecture.  The city’s history begins with the arrival of the Illinois Central Railroad (ICRR) in 1854. Originally there were agriculture dealers and grain elevators, greenhouses, and lumberyards – an assortment of businesses catering to the developing agriculture and construction of the area. As the population rapidly increased, entertainment venues, boarding options and retail spaces emerged. Active building occurred in the area for over a century, with brick buildings eventually replacing the early wood-frame structures. In addition to this being the earliest business district, it has also continually served as the home of Champaign’s city government. The buildings found within the district boundaries represent good local examples of a number of architectural styles popular from the mid-19th century to the mid-20th century.  Together these buildings relay the story of the changing architectural styles for commercial and public buildings from the mid-19th to the mid-20th century.

Glenwood School, Iroquois County, Cissna Park
Listed May 29, 2020
Glenwood School in rural Iroquois County near Cissna Park was listed in the National Register for possessing the qualities typical of one-room schoolhouses.  Around the time the school was built, there were nine public country schools in the township. Today, Glenwood School is the only known schoolhouse remaining.  Exterior defining characteristics of Glenwood School include a rectangular floor plane, symmetrical fenestration, low-pitched gabled roof, vestibule, and an entrance on the short side of the building facing the road. On the interior, the building’s open floor plan, plaster walls, wood wainscoting, teacher’s platform and chalkboards are still intact.

Arsenal Courts Historic District, Rock Island County, Rock Island
Listed January 24, 2020
Constructed on about 19 acres of land, Arsenal Courts (1940-1941) in Rock Island was one of the earliest housing projects in Illinois funded and built through the Federal Works Agency, United States Housing Authority for the purpose of creating – on an emergency basis – new housing units at below market rates exclusively for workers employed in support of the U.S. military and its allies just prior to the start of World War II.  In this instance, one or more persons living in each Arsenal Courts unit was employed at the Rock Island Arsenal, located just two miles away from the apartment complex.  During World War II, the Rock Island Arsenal was one of the country’s largest arsenals, as well as a manufacturer of munitions and military equipment.

Downtown Rock Island Historic District, Rock Island County, Rock Island
Listed March 13, 2020
Encompassing 155 years of history and development, the Downtown Rock Island Historic District (DRIHD) is significant as the center of government, society, and local community culture for the City of Rock Island since its founding in 1841.  The District is also important for its collection of 19th and 20th century architecture, which features a variety of styles including Italianate, Classical Revival, Italian Renaissance, Beaux-Arts, Art Deco, Mid-Century Modern, Gothic Revival, International, and Brutalism.

Rockford Woman’s Club, Winnebago County, Rockford
Listed December 31, 2020
Built in 1918, this building has been home to the Rockford Woman’s Club – a social organization dedicated to philanthropy and the promotion of civic and cultural improvement in the city of Rockford. Since its creation in 1897, the organization has been instrumental in championing the arts, providing educational opportunities, and addressing a variety of important social issues. The building, consisting of a clubhouse, restaurant and theatre, has functioned as an ideal location for the organization’s work and has served as a community anchor in the areas of education, entertainment, recreation and social reform. Today, the club continues to be dedicated to the betterment of the Rockford community and is still housed at this location.

Henson House, Douglas County, Villa Grove
Listed December 31, 2020
The Henson House is significant for its history and its architecture. Original owner George Warren Henson (1821-1881) was a prominent landowner in Douglas County, and it was on property purchased by the railroad from his family that the community of Villa Grove was founded in 1887.  Prior to this, the Henson House was the only residence in the area, and as this stately residence was surrounded by well-maintained grounds and outbuildings, the farmstead was known as “the villa in the grove.”    The property is a successful combination of primarily Italianate, Classical Revival, and Arts and Crafts elements.  Though some features of the property can be assigned to the 1920s and 1930s, the most prominent and significant aspects of the property span the period between 1871 and 1913.