On Saturday, Jan. 9, the nation watched the virtual swearing-in ceremony of Democratic Congresswoman Nancy Pelosi as Speaker of the House.  The oath of office was administered by Mascoutah High School alumna Eva Jefferson Paterson.

The ceremony can be viewed on Facebook at by searching “Speaker Nancy Pelosi’s Virtual Swearing-In Ceremony and Celebration.”

“When I was first asked to administer the oath, I thought it was a joke.  But once I discovered it was real, I burst into tears.  I couldn’t believe it.  It is an honor of a lifetime,” Paterson said. 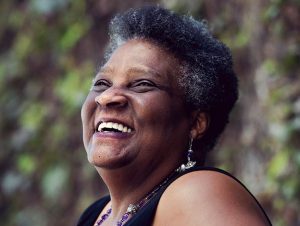 After the oath of office was administered, Congresswoman Pelosi thanked Paterson for her dedication to justice throughout the years. “When I heard Eva speak of justice at my daughter Christine’s graduation from Hastings law school, I became a fan of hers for life.  I was personally inspired by her. Justice will always prevail.”

Paterson said to Pelosi, “We send you energy and protection as you move forward.”

Paterson, 71, grew up in a military family in France, England, and then arrived in Mascoutah where she graduated from Mascoutah High School in 1967.

She was part of a military family assigned to Scott Air Force Base.  In 1966, they were the first black family to live in Mascoutah.

“We rented a house at 703 West Main St.  A man named Louis Lauerman took a big chance when he rented to us.  We were not welcomed, and it almost turned violent.  My brothers were called names as they walked to school.”

Her brothers are Charles, James Jr. and David.  Charles is currently a member of the Mascoutah Economic Commission and on the Mascoutah YMCA exploratory committee.

Despite the turbulent beginning, Paterson has fond memories of the school district.  “I was treated well in high school as were my brothers.”

Her father James Jefferson went to Vietnam in 1966.  Her mother, Doris Jefferson, was a stay at home mother but found time to serve as coach of a girl’s softball team and was the leader of a Girl Scout troop and Cub Scout group.

“I think the women’s movement changed her.  She saw what I was doing in college and soon became incredibly active.”

When James returned from Vietnam, both he and his wife became active in politics.  Doris was a delegate to the 1984 convention in New York City where she met President Jimmy Carter.  Her accomplishments were recognized by the State of Illinois.  In May 2008, the Illinois General Assembly adopted bill SR0672, officially mourning her death.

After graduation, Paterson attended Northwestern University in Evanston, IL where she was the school’s first African American student government president.

A 20-year-old Paterson first captured the nation’s attention when she debated U.S. Vice President Spiro T. Agnew on TV in 1970. As student body president of Northwestern, she respectfully disagreed with the second-most powerful man in the United States and many say she won the debate.  That debate can be viewed on “You Tube” at https://www.youtube.com/watch?v=eje_lk6tQdg

According to an article published on January 20, 2020 in The Daily Northwestern (written by Abigail Sutter), Northwestern University alumna hosted an Eva Jefferson Day on Martin Luther King Day.

“The event was held in honor of alumna and activist Eva Jefferson Paterson. In the first month of her tenure in 1970, students protesting over the killing of four Kent State and two Jackson State students were ready to burn down Lunt Hall, which housed the NROTC. In an article for Northwestern Magazine from 2018, Jefferson wrote that she ‘persuaded students’ to not follow through with burning down the building.”

Following that event, she was named one of Mademoiselle’s “Ten Young Women of the Year,” featured on the covers of Ebony and Jet, and called to testify before Congress.

After graduating from Northwestern, Paterson attended the University of California, Berkley, School of Law.  She worked for the Legal Aid Society of Alameda County and co-founded A Safe Place, a shelter for battered women in Oakland, CA.

Currently, Paterson is the president and a founder of the Equal Justice Society, a national organization dedicated to changing the law through progressive legal theory, public policy and practice. She also worked at the Lawyer’s Committee for Civil Rights for twenty-six years, thirteen of them as Executive Director. A resident of Oakland, Paterson also co-founded and chaired the California Coalition for Civil Rights and co-founded A Safe Place, a shelter for battered women in Oakland.

Information about the organization can be found at equaljusticesociety.org

Paterson has received more than 50 awards, including the Fay Stender Award from the California Women Lawyers, Woman of the Year from the Black Leadership Forum, the Earl Warren Civil Liberties Award from the ACLU of Northern California, and the Alumni Award of Merit from Northwestern University where she received her B.A. in political science.

She co-authored several landmark lawsuits in support of affirmative action such as the successful litigation against U.C. Berkeley’s admissions policy limiting access to students of color and an amicus brief in Grutter v. Bollinger, in which the U.S. Supreme Court upheld the race-conscious admissions policy at the University of Michigan Law School.

Paterson said she still stays close with many members of the MHS Class of 1967 through emails.  On June 9, 2000, she received the Mascoutah Schools Achievement Award.  Her last visit to Mascoutah was in 2007.

“I would like them (Mascoutah School District) to know, I was well trained at Mascoutah High School.  My speech and debate class trained me for this.  I was extremely well prepared by the Mascoutah school.”

Mascoutah School District Superintendent Dr. Craig Fiegel said of Paterson’s accomplishments, “There have been several occasions where MHS graduates have appeared on a national stage. That speaks well for the high school and community. We as a school community are very proud that we are represented by such an outstanding individual.

Paterson’s numerous awards, accolades, and incredible accomplishments throughout the years display the character and dedication of this incredible woman.  She has inspired hope and protection to those who need it the most.

Paterson said she is excited to see what the next four years will bring.