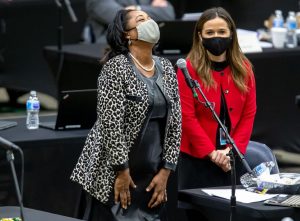 Rep. Sonya Harper, D-Chicago, reacts after the passage of SB 1480 during the lame-duck session of the Illinois House of Representatives held Tuesday at the Bank of Springfield Center. (Credit: Justin L. Fowler of The State Journal-Register)

SPRINGFIELD – A bill aimed at improving racial equity throughout the state’s K-12 and higher education system passed both houses of the General Assembly on Monday, while another bill addressing economic inequities was up for House approval Tuesday night.

Both bills were part of an agenda being pushed by the Illinois Legislative Black Caucus, which called for the rare lame duck session before members of the next General Assembly – and possibly a new House speaker – take office on Wednesday.

The House worked late into the night Monday to pass the two measures after a series of lengthy private caucus meetings, some of which involved negotiations over who the Democrats would nominate for speaker. The education bill had already cleared the Senate earlier in the day and the Senate and was preparing to take up the economic equity bill Tuesday night.

Debates in both chambers were heated, with Black Caucus members arguing that their issues could no longer be ignored and Republicans arguing that despite the Black Caucus’ good intentions, the bills had been put together hastily and were seriously flawed.

“We want to help you accomplish these goals. We want the state of Illinois to open up opportunity to everybody who wants to have that opportunity,” Rep. C.D. Davidsmeyer, R-Jacksonville, said on the floor of the House. “We all want that same thing. This is not the way.”

His comments came after a lengthy debate over the economic equity bill, Senate Bill 1608, which creates a number of new commissions and, among other provisions, includes additional racial diversity requirements in state purchasing policies.

Republicans had tried to delay passage of the bill by requesting several “notes” to determine its fiscal impact to the state and how many new mandates it would create. But Democrats voted to declare those notes “inapplicable” and moved forward anyway.

“Our Black people are looking for solutions,” Rep. Thaddeus Jones, D-Calumet City, said in response. “They can’t get unemployment. They can’t get (Paycheck Protection Program loans). They can’t get the funds that many of your friends are getting on the other side, and all we’re asking is for you to help us.”

During debate on the bill, Rep. Deanne Mazzochi, R-Elmhurst, engaged in a lengthy exchange with the bill’s sponsor, Rep. Sonya Harper, D-Chicago, over details of the bill, pointing out that it requires purchasing officers to consider racial diversity even in the purchase of real estate and vehicles, where the state has little control over the race of the seller or the manufacturer.

After about 45 minutes of debate, Jones made a parliamentary motion to cut off discussion and proceed immediately to a vote. The bill eventually passed, 70-39, sending it to the Senate.

Another economic equity bill sponsored by Harper, Senate Bill 1480, would cap interest rates on payday and car title loans and to limit the use of criminal history records as a basis for employment and housing decisions. It passed the House 70-43 as well.

The education bill, House Bill 2170, drew equally sharp debate in both chambers. That bill creates a number of new mandates for K-12 education, including changes to the state’s social studies requirements, a requirement for districts to provide computer literacy programs and for the State Board of Education to develop new computer science curriculum standards.

But the one that drew the sharpest disagreement concerned changes to the AIM HIGH grant program in higher education, which is currently funded equally between the state and state universities.

The intent of that provision was to lower the cost to schools with smaller endowment funds such as Chicago State University, which last year returned $800,000 of the $1 million in state funds it was allotted, saying it could not afford to pay for its share of the match.

But Rep. Chapin Rose, R-Mahomet, argued in an interview that universities have a variety of ways to pay their share, including tuition waivers equal to their share of the award, and he criticized CSU – which reported a freshman class this year of just 144 students – for not using that option to attract more students.

In the House, Rep. Norine Hammond, R-Macomb, openly criticized the bill’s House sponsor, Rep. Carol Ammons, D-Urbana, arguing that the bill puts additional costs on larger universities, such as the University of Illinois at Urbana-Champaign.

“Representative, this is going to significantly increase student debt, the very issue that we just talked about,” Hammond said. “And you are cutting dollars to the very students that you represent.”