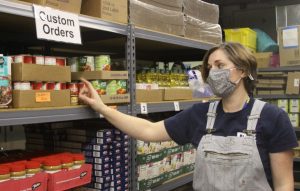 Barb Food Mart in DeKalb recently received 500 pounds of onions, part of a delivery of about 9,000 pounds of food.

BLOOMINGTON – It takes a lot of moving parts to connect fresh produce with the communities that need it most.

You need farmers growing quality food. Funding to pay them. Food banks, pantries and food marts in place to store and distribute. And don’t overlook one of the biggest roadblocks: transportation to get the food from farm to kitchen table.

“Transportation is a critical, critical issue, in terms of time and cost,” Steve Miller, an at-large board member of Illinois Specialty Growers Association, said Thursday during a virtual session at the annual Illinois Specialty Crop Conference.

Here’s the rub, though: To assure that food is fresh when it arrives, the fewer literal moving parts the better.

“If produce comes in from a producer on Thursday or Friday, then sits in a warehouse over the week, it doesn’t get to the families until Monday or Tuesday,” said Dan Kenney, the founder of DeKalb County Community Gardens, who attended the virtual conference.

In DeKalb, nonprofits have finally cut out the middle man.

Enter Klein’s Farms in Elgin, just on the other side of the DeKalb County line. Since late spring, the farm has been selling produce directly to nonprofits in the county at wholesale prices.

“The quality is night and day,” said Joey Moore, who runs the Barb Food Mart that’s served the DeKalb School District 428 community since 2012. “When they’re out picking produce that morning, it’s the highest quality.”

She and Kenney took part in a Zoom discussion with the Illinois Press Association on Friday afternoon.

Even before Klein’s partnered with DCCG and the Food Mart, DeKalb County was light years ahead of other parts of the state in terms of getting food from farm to table as quickly as possible.

Kenney founded DCCG a couple of months after Barb Food Mart launched in 2012. DCCG has since produced more than 200,000 pounds of food, according to its website. In 2017, it launched its Grow Mobile refrigerated truck program. In January alone, two trucks will make 11 distribution stops around the county.

The end result? Rather than receiving produce that’s sat on shelves at food pantries, or been donated by grocers who can no longer sell it, families in need in DeKalb are getting farm-fresh produce.

“The message it sends out to people attending food pantries is that they deserve fresh, high-quality food,” said Heather Edwards, DCCG’s associate director who has overseen the launch of the Genoa Area Community Food Hub in the northern reaches of the county. “We all deserve that. Nobody should feel that they get a lesser quality than they deserve. It’s about their dignity.”

Moore said it’s common for food donated by grocers to be inedible – “I’ve gotten salad that’s basically soup,” she said – and that the only reason it gets donated is so the businesses can write it off.

Food security is in relatively good shape in DeKalb County because a lot of work has gone into it.

DCCG has more than 70 partners and sponsors. A food security council made up of growers, food pantries, the health department, even hospital staff have resumed meeting on a monthly basis. That community buy-in keeps all the key prongs – funding, infrastructure and transportation – running in concert.

Kenney has been working with Steve Ericson, executive director of Feeding Illinois, an association of food banks throughout the state, for a few years, and hopes to help other regions emulate DeKalb’s success.

According to data on Feeding Illinois’ website, about one in 10 Illinois residents struggles with hunger, including one in every eight children, and it would cost more than $630 million to meet the statewide food need.

Farmers sound off during session

Ericson and Shantanu Pai, an assistant sustainability researcher with the University of Illinois’ Prairie Research Institute, hosted the virtual convention session Thursday. They, along with the growers association and Illinois Farm Bureau are carrying out a six-step process that will culminate with launching pilot programs throughout the state that address food insecurity.

The study is funded by a U.S. Department of Agriculture Farm to Food Bank grant. Ericson said it’s imperative to find funding mechanisms beyond communities’ contributions.

“We have a tendency to always go back to donations,” Ericson said. “I’ve been around this long enough to know we’re not going to end food insecurity on donations.”

He and Pai hope to get at least 10 percent of the state’s 3,000 specialty growers to fill out a survey and share what incentives and programs have helped get fresh food into the hands of people in need.

“People don’t often write about what they’ve tried that hasn’t worked,” Pai said. “We’d really like to know what people have tried in the past, and what simply didn’t work.”

While he awaits survey results, a few farmers sounded off during the session.

Nicoele Arseneau, who along with Bill Belluso owns and operates 3 Winds Farm in Kankakee, said the area is poverty-stricken and small farms want to donate their surplus, but the local food bank won’t take perishable items because it has nowhere to store them.

“You and I need to talk,” he said, before sharing his contact information with her.

Louise Meyer, an Illinois Herb Association board member, piggy-backed on Miller’s concerns with transportation. She said her business, Amrita Naturals in Elburn, actually got out of the vegetable business.

“We had plenty of organic produce, but the transportation cost – we were left to do that,” she said. “We were donating it, but we didn’t see how we could afford to transport it.”

She said Illinois is a bit behind the 8-ball, that the food needed in the north – Chicagoland in particular – is predominantly grown in southern Illinois.

“Can you even get it there while it’s edible, especially during the summer?” she said.

She said when she worked on the East Coast, things ran smoothly and electronically. Farmers were reimbursed at the point of pickup.

“If Illinois could ever get out of debt, that’s something we could work toward,” he said.