SPRINGFIELD – Republicans in the Illinois House said Tuesday that they hope to use legislation, instead of a constitutional amendment, to change the way state legislative and congressional district lines are redrawn every 10 years.

The so-called “fair maps” proposal would authorize the General Assembly to set up an independent, nonpartisan commission to redraw the lines, taking that highly political process out of the hands of legislators who currently are able to use that process to protect themselves politically, a process known as “gerrymandering.” 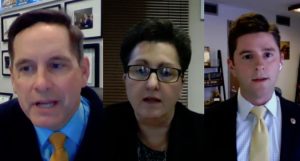 Redistricting is a process that all states go through following each decennial federal census and one that Illinois must complete in the upcoming session so that districts can be established in time for candidates to file for office in time for the 2022 elections.

Rep. Tim Butler, R-Springfield, said the measure is similar to the proposed constitutional amendment that supporters tried to put on the ballot in 2016 before being blocked by a sharply divided Illinois Supreme Court. The main difference is that it would put the process into statute instead of the constitution.

“This is a great way to do it through statute to make sure that we have an independent commission that draws our maps this year, gets it out of the hands of the leadership of the General Assembly and puts it in the hands of a commission of citizens to draw fair and equitable maps across the state of Illinois,” Butler said during a virtual news conference.

In 2016, supporters of such a change circulated petitions to put a constitutional amendment on that year’s general election ballot. That’s one of three ways the current Illinois Constitution allows amendments to be considered. The others are by a constitutional convention or by a resolution approved by a three-fifths majority in both the House and Senate.

However, the constitution also limits the scope of citizen-initiated amendments to “to structural and procedural subjects contained in Article IV,” which pertains to the General Assembly.

In a 4-3 ruling, the Supreme Court blocked the proposal from going onto the ballot because the proposed amendment contained elements that also dealt with the attorney general and the auditor general.

The legal challenge to the amendment was brought by several individuals led by John Hooker, a former Commonwealth Edison lobbyist who is now under indictment for allegedly taking part in a bribery scheme aimed at buying the favor of House Speaker Michael Madigan.

Former Justice Thomas Kilbride, who lost his bid for retention in November, wrote the majority opinion in that case, and that was a factor in the GOP-led campaign to remove him from the court.

“And that decision really still burns me to this day,” said Rep. Ryan Spain, R-Peoria, who was among the nearly 600,000 people who signed a petition to put that amendment on the ballot.

“So something has to change,” Spain added. “And since the Supreme Court decision many years ago, I have repeatedly supported and been either the sponsor or the chief cosponsor of a number of different initiatives to change the way we approach redistricting in the state of Illinois.”

Rep. Jackie Haas, R-Bourbonnais, said her district is an example of how gerrymandering can be unfair to certain communities. She said her 79th House District excludes three-quarters of the small town of Momence, whose 2010 population was 3,171, and includes only three streets in the village of Beecher, which has about 4,500 residents.

“These moves were not based on township, village, or meaningful divisions, but on pure partisan maneuvers to advantage (House Speaker Michael) Madigan, to keep his majority in his power,” Haas said.

Butler filed the bill, House Bill 5873, Tuesday. That makes it eligible for consideration in the upcoming lame duck session, which begins Friday, Jan. 8.

Ethanol center hopes to expand research with $1.9 million from state