SPRINGFIELD – Illinois lawmakers will return to the capital city on Friday for a “lame duck” session that is expected to focus on the state’s COVID-19 response, a nearly $4 billion budget deficit and a host of social issues being advanced by the Legislative Black Caucus.

House Speaker Michael Madigan’s office notified that chamber’s members of the plans in an email sent Wednesday, Dec. 30. Senate President Don Harmon has not officially announced his plans, but his spokesman said in an email over the weekend that senators have been advised to hold the dates open in the event lawmakers are called back into session. 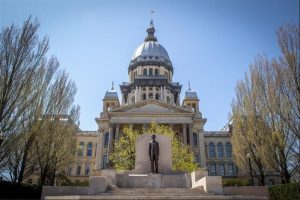 Lawmakers haven’t met since late May when they held an abbreviated special session to pass a budget and a few other items that were considered essential. The regular fall veto session, which had been scheduled for late November and early December, was canceled due to the COVID-19 pandemic.

The budget that lawmakers passed during that special session with only Democratic votes was about $5 billion out of balance. But it was passed on the assumption that Congress would soon pass a stimulus package that would include aid to struggling state and local governments and that voters in November would approve a constitutional amendment to allow the state to levy a graduated income tax. Neither of those two things happened.

In November, Democratic Gov. JB Pritzker announced plans to borrow $2 billion from the Federal Reserve’s Municipal Liquidity Facility to cover revenue losses the state has suffered since the start of the pandemic. That was in addition to the $1.2 billion the state borrowed to make up for revenue losses at the end of the last fiscal year.

In addition, in December he ordered more than $700 million in spending cuts from executive branch agencies. But that still leaves the state more than $1 billion short of what it needs to balance the current year’s budget.

Republicans, who have been clamoring for months for lawmakers to return to session, said during a virtual news conference Monday that they believe Democrats want to use the lame duck session to push through a tax increase to fill the budget hole.

Pritzker has said in the past that he would consider closing certain business tax “loopholes” in order to raise additional revenue, but more recently he has said that he wants to focus on spending cuts.

Madigan, meanwhile, said in December that he was prepared to push for an increase in the state’s flat income tax rate, should Pritzker propose one. But Pritzker has given no indication that he plans to make such a proposal.

Rep. Greg Harris, of Chicago, the House Majority Leader, did not immediately respond Monday to a request for comment about his plans for the special session.

In addition to dealing with the budget crisis, lawmakers may also consider measures regarding the state’s overall pandemic response, which so far has been managed almost exclusively out of the governor’s office.

Many lawmakers, particularly Republicans, have expressed frustration during the pandemic that they have had no role in making decisions that involve closing schools, restaurants and bars or imposing limits on gathering sizes.

“We can stop allowing Gov. Pritzker to run this state unilaterally by executive order,” Durkin said Monday. “We can fix the state’s broken unemployment insurance system that still is barely functioning nearly a year later, resulting in thousands of families struggling to put food on the table each day.”

Also likely to be on the agenda is a long list of policy initiatives being pushed by members of the Illinois Legislative Black Caucus focusing on racial and social justice issues that were thrust into the forefront following the killing of George Floyd by Minneapolis police officers in May.

The session is scheduled to begin Friday, Jan. 8, and could run until Jan. 13, when the 102nd General Assembly will convene to inaugurate new members.