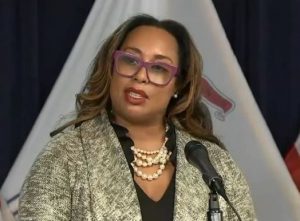 Since the passage of the Cannabis Regulation and Tax Act in 2019, Pritzker has issued pardons in 20,236 marijuana cases. Pritzker previously issued 11,017 pardons for low-level marijuana convictions on New Year’s Eve 2019.

In a release distributed New Year’s Eve, Pritzker also announced that ISP had expunged 492,129 non-felony marijuana-related arrest records in the state database. These expungements will also be mirrored in local law enforcement agencies.

Of the 102 counties in Illinois, only 10 – including DuPage, Kane and Peoria counties – have expunged their records for eligible arrests. The other counties were required to expunge records of arrests created between 2013 and 2019 by Jan. 1 and have until Jan. 1, 2025 to expunge all eligible arrest records.

“As we near the end of the first year of Illinois’ new legal cannabis industry, I am heartened by the progress we have made towards undoing the harms dealt by the failed war on drugs,” Toi Hutchinson, Pritzker’s senior marijuana advisor, said in a statement. “Eleven states in the nation have legalized cannabis for recreational use, but no other state has done the important work we’re doing here in Illinois, where equity intentionality takes center stage.”

The legalization act created three groups of marijuana-related records eligible for some type of expungement. The first two groups are eligible for automatic expungement, meaning no action is required on behalf of the affected party, while the third group requires a court petition to start the expungement process.

ISP’s completed arrest record expungement, and the corresponding record purge ongoing at the local level, is part of the first group. Eligible records for expungement in this category are arrests for possession under 30 grams or less that occurred before June 25, 2019. The arrest must not have resulted in charges, or if it did, those charges were dropped, dismissed, resulted in acquittal, or resulted in qualified probation that has been completed.

This automatic expungement only occurs in law enforcement databases. To remove all mentions of the arrest from court records, a motion must be filed by the defendant in the court where the charges were brought.

Arrests for minor marijuana offenses that were tied to a violent or sexual crime are also not eligible for expungement. Neither are arrests for delivery on school grounds, trafficking or possession of marijuana plants.

Records available for automatic expungement in the second group go through a six-step process that includes a pardon from the governor, such as the ones issued Thursday. These are convictions for low-level misdemeanors that occurred before June 25, 2019, such as possession of 30 grams or less, or the sale of marijuana up to 10 grams.

Eligible convictions are first compiled by ISP and delivered to the Prisoner Review Board. If a conviction was for a class 4 felony, the state’s attorney for the jurisdiction in which that conviction took place can object to the case being eligible for expungement, which is then resolved in a hearing.

The PRB will then recommend eligible convictions to the governor for a pardon. The governor then decides whether to accept or deny the recommendation. Pardons issued by the governor are given to the Illinois attorney general, in this case Illinois Attorney General Kwame Raoul, who then files a request with the circuit clerk where the conviction occurred to expunge the record. The circuit clerk then expunges the record and sends an order to law enforcement to expunge records related to the conviction as well.

According to PRB Chair Craig Findley, the board expects to review “thousands of additional felony and misdemeanor” marijuana offenses in 2021.

The third and final group of records eligible for expungement are not subject to an automatic process, but require a court petition filed by the convicted party. These are for marijuana offenses that do not qualify for the previous two groups.

As part of the legalization law, a portion of tax revenue from the legal sale of marijuana must be put towards the expungement process. For convictions in the third group that require a court petition, these funds go toward legal assistance through the New Leaf Illinois initiative that connects eligible Illinoisans seeking to remove convictions from their record with 20 nonprofit organizations that provide free legal representation and information on expungements.

“Statewide, Illinoisans hold hundreds of thousands low-level cannabis-related records, a burden disproportionately shouldered by communities of color,” Pritzker said in a release . “We will never be able to fully remedy the depth of that damage. But we can govern with the courage to admit the mistakes of our past—and the decency to set a better path forward.”

Illinoisans with an arrest or conviction for marijuana seeking legal aid can visit NewLeafIlliois.org or call the New Leaf Illinois hotline at (855) 963-9532.