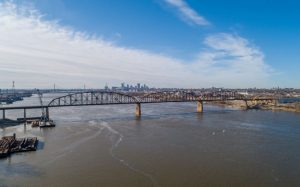 Work is under way on the Missouri and Illinois sides of the Merchants Bridge as part of the $222 million project to replace the rail bridge that crosses the Mississippi River north of downtown St. Louis. (Photo courtesy Terminal Railroad Association of St. Louis)

The St. Louis Regional Freightway helped to advance the bi-state St. Louis region as a world-class freight hub in 2020 and showcased the region’s resilience and continued importance in the global supply chain as the COVID-19 pandemic raged on.

“From seeing infrastructure investment continue for nationally significant projects, to maintaining our standing in key rankings of our freight competitiveness, 2020 proved to be another banner year for the St. Louis region’s freight district, despite the unprecedented challenges brought on by the coronavirus pandemic,” said Mary Lamie. “We’re proud of the way our region performed and welcome the opportunity to summarize some of the highlights to reinforce that there is still much to be positive about heading into 2021.” Lamie is the executive vice president of multi-modal enterprises for Bi-State Development, which oversees the St. Louis Regional Freightway as one of its enterprises.

The St. Louis region also continues to rank as the most efficient inland port district in the nation in terms of tons moved per river mile. During 2019, the St. Louis region’s barge industry handled more than 436,000 tons per mile along the 70 miles that make up the port system. The system also has the second highest concentration of port facilities per mile of all inland ports, contributing to growing awareness of a 15-mile stretch of the Mississippi River that flows through Southwestern Illinois and Eastern Missouri at St. Louis known as the Ag Coast of America.

Growth at the region’s various ports is significantly influenced by the collaboration between them and other Midwest ports as they work together to get more barge loads on the Mississippi River and keep freight rates competitive.

After welcoming the launch of container-on-barge services in the St. Louis region in 2020, that collaboration is also paving the way for the debut of innovative container-on-vessel (COV) service on the Mississippi River and adjacent inland rivers. The COV service is part of a plan calling for patented new waterway vessels that will move large volumes of goods and commodities along the inland waterways, serving key consolidation ports in St. Louis and Memphis, and several other feeder ports. The new service will effectively create an all-water north-south trade lane connecting the Midwest to the lower Mississippi River and on to worldwide destinations. Based on milestones reached in the latter part of 2020, service on the new route could be available to shippers by the first quarter of 2023.

While not freight related, also noteworthy was MidAmerica St. Louis Airport posting the best passenger recovery in the United States even as the pandemic continued to impact air travel nationwide. MidAmerica saw the smallest decline in summer passengers of any airport in the country, with the Transportation Security Administration screening 40,590 departing passengers from June 1 to Aug. 31.

The St. Louis Regional Freightway’s 2021 Priority Projects List, which was released in May 2020, includes 21 projects representing a total investment of $2.2 billion. With more than half that amount covering projects already under construction or set to get underway by year’s end, it shows tremendous progress is being made to strengthen critical roads, bridges, rail infrastructure and port and airport facilities with the projects representing key infrastructure needs of the manufacturing and logistics industries in the region. Specific investments include:

·         Progress continues on the $222 million project to replace the 129-year old Merchants Bridge, a vital rail artery across the Mississippi River and one of the nation’s primary east-west rail corridors serving the nation’s third largest rail hub. When completed in 2022, the new double track bridge will help move freight faster, cost-effectively and more reliably, providing an alternative to more congested rail regions like Chicago. Largely funded by the Terminal Railroad Association of St. Louis, the project also received $21.5 million this year from the Federal Railroad Administration in a Consolidated Rail Infrastructure and Safety Improvement grant.

·         Unprecedented collaboration between the Missouri and Illinois Departments of Transportation facilitated the generation of $600 million for work to enhance portions of Interstate 270 in eastern Missouri and southwestern Illinois over three years, despite both DOTs experiencing drastic funding level reductions. MoDOT and IDOT worked collaboratively on construction and design during 2020 to enhance I-270, which supports companies such as AB-InBev, Boeing, World Wide Technology, Procter & Gamble, Amazon and others which have facilities along the critical bi-state corridor. In all, hundreds of millions of dollars are supporting projects along the combined I-270/Interstate 70 Corridor — one of the nation’s primary east-west manufacturing and logistics corridors.

·         Among the new projects added to the Priority Project List in 2021 are improvements along Interstate 55 in Jefferson County, Mo., to support heavy truck movement and existing and future port operations, while various improvement projects on I-70 from Wentzville to Stan Musial Veteran’s Memorial Bridge were elevated to top priorities. Missouri Governor Mike Parson has included money in his Cost Share Program to support $3.5 million in improvements to Route A leading to the General Motors truck plant in Wentzville, where GM is investing $1.5 billion to make what it calls the “next generation” of mid-sized pickup trucks.

·         The Federal Aviation Administration in September awarded almost $7.1 million to St. Louis Lambert International Airport to fund the reconstruction of one of the airport’s taxiways. The airport also will not be required to put up the usual matching funds to cover the project’s entire cost as CARES Act funds will cover the balance. A key phase of the planned terminal expansion at MidAmerica St. Louis Airport got underway this fall thanks to nearly $6.5 million in FAA funding. The project includes critical infrastructure and safety improvements to enhance overall operations at the airport, which was seeing significant passenger growth year-over-year prior to the COVID-19 pandemic and continues to operate as a joint-use airport with Scott Air Force Base.

Growth in the industrial sector

While infrastructure investments are being made across the two-state region, several of the projects reinforce the strength of the I-70 Corridor linking Missouri and Illinois as a major east-west logistics corridor. The latest St. Louis Regional Real Estate Market Indicators & Workforce Statistics report reveals 94% of all bulk industrial construction in the St. Louis region since 2016 has been focused along this corridor. The demand for distribution space has only been growing, and with recent record setting construction adding to the thriving modern bulk inventory, the St. Louis region is ready to meet that demand today, and in the post COVID-19 environment.

To showcase the activity, the St. Louis Regional Freightway launched the expanded Featured Real Estate Sites Map section of its website, which features a wealth of information about the bi-state St. Louis region’s growing real estate market with its abundance of warehouse/distribution buildings and land sites in southwestern Illinois and eastern Missouri that is ready for all types of industrial and corporate users. The new tool at www.thefreightway.com/real-estate/ aims to be a leading source of up-to-date information for the entire industrial market as the St. Louis Regional Freightway works to provide both marketing for active sites and accurate listings for interested parties.

Moving through the pandemic

As the COVID-19 pandemic continued to impact the movement of goods into, out of and throughout the United States, the consistent response across the freight network in the bi-state St. Louis region helped to ensure it continues to deliver in these unprecedented times and solidified the region’s position as a leader in the nation’s freight network. At America’s Central Port in Illinois, for example, despite having to implement a whole range of measures to keep everyone safe, operators at the port on the Mississippi River north of St. Louis, continued to handle a tremendous volume of corn and soybeans, and the by-products, destined to ultimately feed the U.S. and the world. According to Executive Director Dennis Wilmsmeyer, it remained “business as usual” with a tremendous amount of freight still moving to and through the St. Louis area. He noted the operators there are just as essential to keeping the supply of food on the shelves as the truck driver who makes those daily deliveries.

Trucking and rail companies also played a key role in keeping essential goods moving, serving as first responders without being in the medical field. Capacity issues on the trucking side were avoided due to the flexibility and adaptability of the industry, with trucks that typically would have moved auto parts, for example, freed up to move more essential items such as groceries and medical products. As the COVID-19 pandemic began to spread, TRRA noted a particularly noticeable drop in intermodal traffic, presumptively due to falling imports from China, while also seeing a drop in traffic volumes from auto plant closings. However, medical supplies, food, chemicals, cleaning products and anything else being used to battle the pandemic continued to be moved through the St. Louis region headed to all parts of the nation via the region’s rail network.

“The continuing successes our region enjoyed during a remarkably challenging year are a testament to the multi-jurisdictional support of infrastructure investment from East-West Gateway Council of Government’s Board and the overwhelming support of the St. Louis Regional Freightway’s marketing efforts from critical partners,” said Lamie. “Working with the USDOT, IDOT, MoDOT, elected leaders and members of the private sector spanning two states and 15 counties, we have positioned the St. Louis region for continued growth and are continuing our collaboration with other regions within the nation’s supply chain to support shippers and carriers as the world rebounds. Moving forward, we’ll continue to maximize funding opportunities and improve the region’s multimodal capabilities, support the region’s industrial real estate market and will look for ways to monetize the value of our freight assets.”

The St. Louis Regional Freightway is a Bi-State Development enterprise formed to create a regional freight district and comprehensive authority for freight operations and opportunities within eight counties in southwestern Illinois and eastern Missouri which comprise the St. Louis metropolitan area. Public sector and private industry businesses are partnering with the St. Louis Regional Freightway to establish the bi-state region as one of the premier multimodal freight hubs and distribution centers in the United States through marketing, public advocacy, and freight and infrastructure development. To learn more, visit thefreightway.com.