The Kaskaskia Regional Port District appeared on a recent episode of “World’s Greatest TV Show,” which aired locally on both cable and satellite television in November. 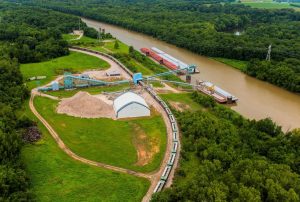 Ranking as the tenth-largest inland port in the country with annual tonnage exceeding 1.5 million tons on the Kaskaskia River, the port district has been a fixture of Red Bud, Ill. for more than half a century and is home to a variety of specialized and dedicated tenants.

The show’s producers said they were looking for something that had a mix of different operations that translated into a good story.

“World’s Greatest TV Show” is a national television series that takes viewers on a fast-paced tour around the world, featuring behind-the-scenes footage and interviews to bring interesting people, places and companies into the spotlight.

Through the use of aerial shots, drone photography inside a warehouse and GoPro camera shots from the bucket of an excavator unloading a barge, viewers got a close-up look at the activity that occurs daily within the port district and on the river.

“Being included in the World’s Greatest TV Show was such a wonderful opportunity for Kaskaskia Regional Port District,” said Ed Weilbacher, general manager of the Kaskaskia Regional Port District. “It shows the dynamic nature of the port, the variety of products being handled here and how we serve the community. It is a true asset for the entire region.”

“This is another in a long list of accolades for the diverse ports that make up the St. Louis region’s port system,” said Lamie.  “Within the United States, the St. Louis region has become the most efficient inland port system, according to the U.S. Army Corps of Engineers (USACE), home to the second and tenth largest inland ports, second highest volume inland water port and the Ag Coast of America. Kaskaskia Regional Port District is an integral part of our region’s port system and we hope viewers of the show enjoyed getting to know more about its operations.”