SPRINGFIELD — The governor’s office and the Illinois Department of Commerce and Economic Opportunity are awarding $500,000 through existing and new state programs as part of a “Digital Equity Package.”

The Illinois Office of Broadband, which is based in the DCEO, is spearheading the targeted investment program. The package gives modest grants to community-based and regional actors to address gaps in household access to computing devices, hotspot connectivity and digital literacy skills. 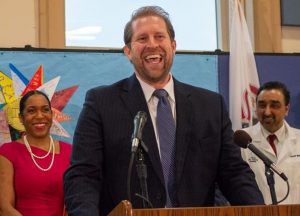 PHOTO: Matt Schmit, head of the Office of Broadband within the Illinois Department of Commerce and Economic Opportunity, speaks Wednesday, Feb. 5, at Ridgely Elementary School in Springfield to announce the release of the first phase of funding for a matching grant program to increase broadband internet access in the state. (Capitol News Illinois photo by Jerry Nowicki)

While Gov. JB Pritzker’s administration has also launched the $400 million Connect Illinois program – funded through 2019’s Rebuild Illinois capital infrastructure program – with the goal of expanding broadband capacity statewide by 2024, these significantly smaller grants are aimed at addressing inequalities and gaps in coverage that may not be solved simply by the growth of the state’s broadband network.

“High speed broadband internet is an absolute necessity for economic progress and educational attainment, but too many of our towns and counties and communities have been left out of the digital revolution, especially downstate,” Pritzker said in a release. “It’s time for that to change. To accomplish our goals, we need resources and expertise.”

The digital equity investment is split between three programs using $500,000 in state dollars alongside $250,000 in non-state funds.

Broadband Regional Engagement for Adoption and Digital Equity grants, part of the Broadband READY program, will award organizations up to $50,000 to identify inequities in digital access and develop scalable solutions.

The DCEO splits Illinois into 10 economic development regions. The Broadband READY grants will be awarded according to how organizations plan to solve pressing digital needs in their regions. Two such areas of need are telehealth and remote learning, fields where shortcomings in broadband access has been a detriment to downstate and rural counties in the age of COVID-19.

The state is providing $250,000 in grants with another $100,000 being put forward by the Illinois Innovation Network, which is a group of public universities and community colleges that works with government agencies businesses, and community organizations to improve the state economy.

The program will act as a primer for regions to establish a framework for future broadband projects so they can compete for heftier grants offered by Connect Illinois or federal programs tied to digital infrastructure.

The Digital Navigator Collaboration is another project of the Office of Broadband that will spend $100,000 on “digital navigators” that offer consultation for communities that struggle with home connectivity, managing devices and other digital skills.

Digital navigators will be volunteers or staff from social service agencies, libraries and health care centers that can offer remote and in-person guidance to members of their community. Qualified applicants will receive training on how to assist residents.

“We’d like to develop this into a full statewide network,” Office of Broadband Director Matt Schmit said. “Almost like a one-stop shop. Instead of folks calling the Office of Broadband and trying to get a hold of me, getting what I would hope to be helpful information and guidance, we’ve got a network of folks around the state that are able to make those connections.”

Illinois Connected Communities, a pre-existing grant program, will be awarding a second round of funding as part of the Digital Equity Package – $150,000 will come from the state with another $150,000 in funding matched by philanthropic and non-state entities. The program offers community organizations up to $15,000 in grants centered around three aspects of broadband: access, adoption, and utilization.

These grants offer funding for data gathering and organizing so communities can discover shortcomings, non-governmental partners and sources of non-state funds for projects. The first round of grants went to 12 organizations in July, including four school districts, two municipal governments and other organizations.

Ronda Sauget, executive director of the Leadership Council of Southwestern Illinois, said because of the modest grant her organization received, it was able to identify gaps in broadband coverage and problems with connectivity that local internet service providers weren’t addressing and found funding opportunities to address them.

The Leadership Council and Fairmont City were able to find a non-profit organization, PCs for People, to provide low-cost hotspots and computers to families as a stopgap measure to solve connectivity issues while the city and organization work on a permanent fix.

“A lot of communities purchase hotspots for their students and they spend a lot of money doing that,” Sauget said. “Well, you know maybe that money will be better spent on developing a long-term solution.”

Kyle McEwen, executive director of Mercer County Better Together, said the grant his organization received from the program allowed it to reach out into the community regarding broadband access and quality. According to McEwen, information on the county’s capacity for broadband was either unavailable or completely inaccurate when looking at state data or national data from the Federal Communications Commission.

“The divide in broadband access really had grown worse than we thought in the county,” McEwen said, something that’s not reflected in federal data that shows continuous coverage throughout Mercer County. “We have 560 square miles of county. As you go west (broadband) got more sparse. On access and use it gets progressively worse the farther you go west.”

McEwen called the program the first domino that will allow the county to position itself for more future state and federal grants to build broadband infrastructure and digital access for rural residents and agricultural business.

Schmit and the Office of Broadband have billed the Digital Equity Package as the first in a series of steps being pursued by the Pritzker administration to address the lack of broadband and digital access in downstate and rural Illinois with more projects and funding opportunities to be announced in December and early 2021.

Applications for grants can be found under “Grant Opportunities” at https://www2.illinois.gov/dceo.