SPRINGFIELD – A longtime champion for workers and leader of one of the state’s pre-eminent labor organizations now has his place in history cemented prominently across from the Illinois State Capitol this week.

The Illinois AFL-CIO, representing nearly 900,000 workers in 1,500 affiliated unions across the state, dedicated a new statue and sign boards in its Labor History Plaza Wednesday morning to Reuben Soderstrom at the AFL-CIO headquarters just southeast of the Illinois Capitol grounds.

Soderstrom served as President of the IL AFL-CIO for 40 years and is recognized for his defining roles as a prominent labor leader and humanitarian. The centerpiece bronze statue symbolizes his finger-in-the-air “Progress!” speech from 1920 in the back of a flatbed truck in Mendota, Ill., with Franklin Delano Roosevelt, before FDR became our nation’s 32nd president. More about Reuben Soderstrom is here:

A new flagpole, several plaques and brick memorial pavers have been installed in the Labor Plaza. High¬ definition digital signs measuring 8 feet by 11 feet are located at each end of the plaza commemorating labor’s rich history to those passing by the busy street. The Soderstrom Family Foundation donated the statue and one of the plaza’s digital sign boards. 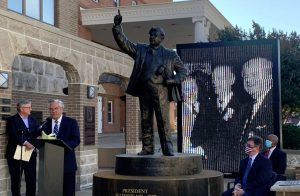 Oct. 7 is also significant because it marks the date in 1965 when Dr. Martin Luther King joined then-president Reuben Soderstrom to speak to the 8th Annual Illinois AFL-CIO Convention delegation in Springfield.

“We dedicate this statue today in honor of Reuben Soderstrom, a great humanitarian and labor leader,” said Dr. Carl Soderstrom, in honoring his father’s accomplishments. “As President of the Illinois AFL-CIO for 40 years, it is fitting that his statue is placed at the State Headquarters of the Illinois AFL-CIO. The Illinois Labor History Plaza will be a destination for Illinoisans to learn about the significant contributions  working men and women have made to this great state.”

“President Soderstrom made such a positive impression for 40 years of leadership on behalf of working men and women and left a legacy of tremendous accomplishments and progressive  ideals that our generation is working to build on today. The Illinois Labor Plaza will stand tall for many generations to come because of this generous gift from the Soderstroms, and our hope is everyone who passes by it will see our rich history, appreciate the sacrifices of  the  past, and recognize the  opportunities we have today and tomorrow to support working families.”