U.S. Attorney Steven D. Weinhoeft on Wednesday praised the Senate onfirmation of Judges David W. Dugan and Stephen P. McGlynn and publicly welcomed them to their new positions on the federal bench in southern Illinois.

Dugan and McGlynn were both confirmed to lifetime appointments on Sept. 16 and officially sworn in late last week. Their selection fills a pair of vacancies on the court after the 2019 retirements of District Judges Michael J. Reagan and David R. Herndon. 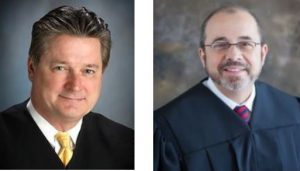 “On behalf of the U.S. Attorney’s Office, it is my honor to extend a warm welcome to Judge McGlynn and Judge Dugan as they begin their federal judicial careers here in the Southern District of Illinois,” Weinhoeft said. “They are joining a court with a long tradition of wellrespected, dedicated, and fair-minded jurists, including their predecessors Judge Michael Reagan and Judge David Herndon. And we have no doubt that the court’s newest members will help carry that tradition forward for many more years to come.”

Weinhoeft continued, “Judge McGlynn and Judge Dugan are also joining a court that will be very glad to receive them. For the past 18 months, despite their already demanding caseloads,

the two veteran district judges and one senior district judge have had to absorb a significant amount of extra work, all while navigating the longest government shutdown in U.S. history and a global pandemic. And so we also extend our gratitude and recognition to the entire courthouse family for weathering that storm and continuing to dispense justice while these two positions were vacant.”

Weinhoeft also thanked the Democratic senatorial delegation and the Republican congressional delegation for working together, and with the White House, to bring a full complement of judges back to the Southern District of Illinois.

“At a time when political fights dominate the headlines, it is good to see government function effectively by adding two well qualified and experienced judges, to bring our court back to full strength. That is certainly something to celebrate.”