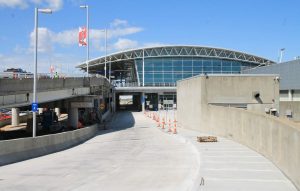 Workers will spend Friday morning adding some final pavement markers to the roadway. The first part of a two-part project was completed on-time. This first part was scheduled for completion in two weeks.  Lambert made these necessary enhancements at Terminal Two to improve traffic congestion and add curbside parking on the arrivals level of the terminal. A refreshed wayfinding sign system will follow in the upcoming months, improving the airport experience on both the arrivals and departure levels. In recent years, T2 has seen a significant rise in passenger traffic and an increase in the demand for curbside activities.

This work is one portion of a multi-phase project, originally part of a 2017 airport bond proposal. Further improvements funded by this bond will include a Terminal Two garage entrance for eastbound Lambert International Boulevard to further ease traffic on Arrivals Drive.

The airport’s goal with this work is to improve the passenger experience at Terminal Two — ­­home to Southwest Airlines at Lambert.

PHOTO: View of the widened roadway to the arrivals level at Lambert’s Terminal 2.