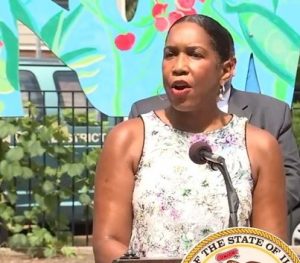 Lt. Gov. Juliana Stratton said on a conference call Thursday that the state would have to raise income taxes by $4 billion, more than the income tax amendment would have brought in before the Pritzker administration’s shutdown orders ground the state’s economy to a crawl amid the pandemic.

“To adequately address the budget crisis under our current tax system, lawmakers will be forced to consider raising income taxes on all Illinois residents by at least 20 percent regardless of their level of income,” she said. “We all know that our middle and low-income families cannot withstand a 20 percent tax increase and it will only serve to deepen the dramatic inequities that we already see across the state.”

A 20percent income tax increase would put the state’s income tax rate at 5.94 percent. This would also be the highest personal income tax rate in Illinois history. In 2011, lawmakers increased the income tax to 5 percent and allowed part of it to sunset before raising it again to 4.95 percent in 2017.

Knowing the pandemic would hobble the state’s revenue, Pritzker enacted a $43 billion budget that relies upon loans and the uncertain prospect of untethered federal aid.

Stratton stressed that an income tax increase of that proportion would hurt the state’s economy, already ailing from the pandemic and “deepen the dramatic inequities that we already see across the state.”

If approved, the progressive income tax amendment would increase taxes on those earning more than $250,000 to 7.75 percent. It would scale up to 7.99 percent at income over $1 million, also retroactively taxing all lesser income at that higher rate once the filer earns that much.