The former leader of The Bank of Edwardsville and Magna Bank has joined Carrollton Bank.

“My career has been working with leading local banks in Madison County and St. Clair County,” said Holloway, “and this move gives me the opportunity to continue doing what I like to do best.”

He said is looking forward to being able to spend his time working directly with business owners and customers without the daily administrative responsibilities of running a bank.

“Several banks approached me about joining them,” said Holloway.  “When I decided that a move back to a local bank was the right one for me, Carrollton Bank was the obvious choice.” 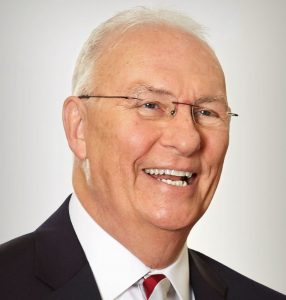 “Tom has the ideal combination of bank leadership, an outstanding reputation, and strong local roots,” said Tom Hough, CEO of Carrollton Bank. “We are extremely pleased that he has chosen to join our bank.”

“I look forward to working with Bill Barlow, Dan Jackson, Tom Hough, and everyone at the Edwardsville and O’Fallon Carrollton Banks,” Holloway said.

“It’s going to be great working with Tom again,” said Bill Barlow, president of the Carrollton Bank in Edwardsville.  “We’ve worked together for six years and been friendly competitors for another four years.  I know from firsthand experience what an excellent banker he is, and we all know of the many contributions he has made to our community.”

Dan Jackson, president of the Carrollton Bank in O’Fallon, has a similar 13-year history of friendly competition with Holloway in St. Clair County. Together, Holloway, Barlow and Jackson have almost 100 years of experience serving metro-east business owners and customers.

Hough added, “For 30 years we’ve seen big, out-of-market banks buy up leading local banks in St. Clair and Madison Counties. Many bankers from those fine organizations have joined our bank so they could continue serving their customers the same way they always had.”

In addition to its banks in Edwardsville and O’Fallon, Carrollton has Illinois locations in Alton, Jerseyville, Carrollton and Springfield, and Missouri banks in Clayton, Des Peres, St. Louis Hills, Creve Coeur, St. Charles and Arnold. The bank is privately owned by its bankers, has been led by five generations of the same family for 143 years, and has $2 billion in assets.