‘We have a lot of work to do,’ board chair says

SPRINGFIELD – The Illinois Board of Higher Education is preparing a strategic plan to make higher education more equitable in the state.

The board focused on gender disparities in higher learning at its regular meeting this week.

While the plan will be released for public scrutiny between December and March of next year, since August, the board has shared presentations on different forms of equity at its monthly meetings.

In a news release the day of their meeting Tuesday, IBHE noted that African American men are far less likely to be enrolled in an undergraduate education compared to women of the same race. The same holds true for Latino men, although undergraduate enrollment for Latino men and women has increased since 2013. Enrollment trends for Latinos, while not at the same level as white Illinoisans, have generally increased over the past decade and continue to improve.

In 2018 – the most recent data available – 27,262 Black men were enrolled in community colleges or public or private universities compared to 48,397 Black women that same year. This is despite Black men outnumbering Black women in the state, 309,204 to 297,676.

Undergraduate enrollment among Black Illinoisans of either gender has fallen sharply in the last decade. For both groups, the change in enrollment from 2013 to 2018 was a decrease of around 30 percent. It was slightly higher for men (30.6 percent) than women (28.4 percent).

“This data is hard to look at, but we need to see it to know where higher education in Illinois needs to improve,” IBHE Executive Director Ginger Ostro said at Tuesday’s meeting. “This new data, disaggregated by gender, surprised us and gives us more information as we focus on how to pursue equity.”

Even though Black women were more likely to earn a degree than Black men, they typically earn less money than a Black man with the same level of education.

Per the same data, a larger gap existed between white males and white females with the same level of education, although both groups made significantly more than their Black counterparts. White women could expect to earn $39,541 one year out of college and $46,859 after three years, while a white man with the same level of education averaged $43,821 after one year and $55,623 after three years.

“When Gov. JB Pritzker appointed this board with a clear focus on closing equity gaps in Illinois higher education, we knew that we needed to start with an honest and sober look at all the data so that we could begin our strategic planning process with a clear understanding of where the system is falling short,” John Atkinson, IBHE chair, said. “These data, along with our report last month, tell that difficult story. It remains clear that we have a lot of work to do.”

The strategic plan for increased equity will be released for public comment sometime next year before it is formally submitted to Pritzker’s office for approval.

After discussing racial disparities last month and gender-related disparities this month, IBHE will also discuss income and geographic disparities in future board meetings. 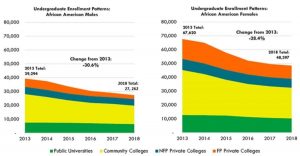