SPRINGFIELD — Gov. JB Pritzker appeared in Macomb Friday to promote the census less than two weeks before the Sept. 30 deadline for responses.

As of Thursday, Illinois was 16th in the country for “total enumeration,” or the percentage of households in the state that have been counted in the census, at 96.2 percent. The state has been above average when it comes to self-response when household representatives fill out the census themselves by mail, through the phone, or online. 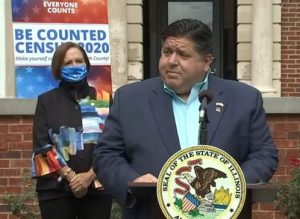 With a 70.5 percent self-response rate, Illinois is 7th in the nation, and first among states with a population over 10 million.

The state’s total enumeration has been dragged down by the difficulty census workers are having reaching households. Door-knocking census takers will go to households that have not yet filled out a census response and record the information of who lives there, a process recorded by the U.S. Census Bureau as “enumerated in nonresponse followup,” or NRFU.

Illinois has an NRFU rate of 25.7 percent as of Thursday, the 10th lowest in the country. The state’s highest self-response and NRFU rates have typically come from suburban parts of the state, with some rural and urban census tracts having lower records of response.

Census counts are directly tied to aid and funding from the federal government. A lower enumeration rate can equal hundreds of millions of dollars lost to Illinois over the next decade. It’s also tied to how many representatives the state receives in the U.S. House.

“The higher the count, the more of your federal tax money comes back to Illinois instead of going to other states,” Pritzker said at the Macomb news conference. “Just a 1 percent undercount could result in the state losing hundreds of millions of dollars in federal funds, and that’s at a time when, frankly, we need those funds the most.”

According to Pritzker, Illinois is currently one of a few states that receives less money from the federal government than it pays in.

While the census count is normally completed by June, there is a federal lawsuit currently underway to extend the census deadline to an end date of Oct. 31 that was at one time scheduled due to the pandemic. The Trump administration shortened the deadline by a month in July, arguing the Census Bureau and state governments needed the census to be completed earlier to have enough time for the process of drawing new congressional districts and determining representatives.

Pritzker, however, said the state is approaching the deadline as if it is officially Sept. 30.

PHOTO: Gov. JB Pritzker speaks at Western Illinois University in Macomb about the importance of filling out the U.S. Census. (Credit: Illinois.gov)