TOP PHOTO: East St. Louis Mayor Robert Eastern III talks during a news conference Monday in his city about his recovery from COVID-19 this spring. “I never felt that bad in my life,” he said. “I was scared not knowing what the outcome may be.” (Credit: blueroomstream.com)

SPRINGFIELD – State and local officials in the Metro East area cautioned residents on both sides of the Illinois-Missouri line Monday to be diligent about protecting themselves and others from COVID-19.

“It is in the best interests of all St. Louis and Metro East residents, Illinoisans, and Missourians alike, to take action now to bring down the positivity rate,” Illinois Gov. JB Pritzker said during a news conference in East St. Louis. “And we’re working together across the border to make sure that that happens.”

Pritzker’s comments came one day after the Illinois Department of Public Health announced new social and economic restrictions for the six-county area in the wake of the region’s rising number of cases and test positivity rate.

“I was diagnosed positive on July 13,” he said. “I was OK, feeling-wise. That Wednesday (July 15) hit me like a ton of bricks. I never felt that bad in my life. I was scared not knowing what the outcome may be.”

Eastern noted that the city of East St. Louis recently enacted a mandate that all individuals within the city limits wear a face covering whenever they are outside of a private residence.

“East St. Louis, I ask you to stay patient and to take proper safety measures so we all can start focusing back on rebuilding a new normal,” he said.

“If you haven’t been taking this seriously yet, now is the time to start,” Pritzker said. “Wear a mask to maximize the chance that children can have in-person learning this fall. Maintain six feet of physical distance to keep the small business owners’ dining rooms open and retail stores in business. Each of us has a role to play in the future of this region’s health and economy.”

The new mitigation efforts are not as severe as those that were in place statewide during Phase 3 of the reopening plan, which ended June 26. But they are more stringent than those that have been in place during Phase 4. They include requiring bars and restaurants to close at 11 p.m. and limiting seating in those establishments to six people per table.

Bars are being told to seat people only at tables and to remove bar stools to prevent gathering around the bar.

Elsewhere, public gatherings, meetings and social events will be limited to 25 guests or 25 percent of the overall room capacity. All reception halls will be closed and party buses will be shut down. 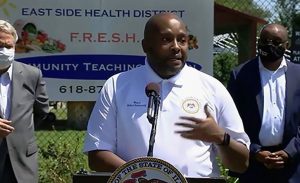 Casinos are being ordered to close at 11 p.m. and are limited to 25 percent capacity.

Those restrictions will remain in place for at least 14 days, which is the average incubation period for the virus. If the test positivity rate does not fall below 8 percent during that time, IDPH said more stringent measures will be imposed, possibly including the closure of bars and restaurants

“On the flip side, if the positivity rate falls below 6.5 percent, on average, these new mitigation measures will be removed and this region will return to Phase 4 of the Restore Illinois plan,” Pritzker said.

Metro East is the first of the state’s 11 regions to reach the resurgence levels that trigger new restrictions. The region consists of Bond, Clinton, Madison, Monroe, Randolph and St. Clair counties.

Officials have attributed much of the increase to cross-border travel to and from St. Louis, where mitigation efforts have been less strict than in Illinois since the start of the pandemic.

In addition to the new measures in the Metro East region, IDPH also issued a COVID-19 travel advisory map on Monday, as well as guidance for people traveling domestically or internationally. The map shows states with an average daily case count 15 per 100,000 population or greater. Illinois is at 14 cases per 100,000 population.

The documents do not restrict Illinoisans’ travel but offer advice about the places that pose the highest risk and how to stay protected while traveling.

“We know that people may have to travel,” Ezike said, “but potentially based on where you may go, that travel may increase your risk of exposure to COVID-19 by putting you in contact with people who have a higher chance of having the virus.”

IDPH also announced Monday that the state had recorded 1,773 new cases of COVID-19 over the previous 24 hours. That followed 1,562 cases reported Sunday and 1,828 on Saturday. That brought the statewide total number of cases since the pandemic began to 207,854. 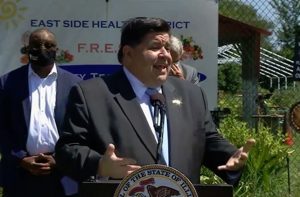 Illinois Gov. JB Pritzker speaks during a news conference Monday in East St. Louis about increased restrictions the state has placed on the Metro East region because of COVID-19 statistics there. “It is in the best interests of all St. Louis and Metro East residents, Illinoisans, and Missourians alike, to take action now to bring down the (test) positivity rate,” Pritzker said. (Credit: blueroomstream.com)