SPRINGFIELD — Gov. JB Pritzker on Wednesday announced the release of $46 million in grant funding for small businesses affected by the COVID-19 pandemic, warned of potential further shutdowns if case counts continue to rise and called widespread use of face coverings the key to preventing such action. 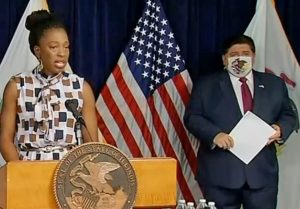 The funding comes from the Business Interruption Grant, or BIG, program which is funded through the federal CARES Act.

The initial allotment of $46 million split between 2,655 small businesses is part of $636 million in total funding for the program. Of that funding, $270 million will go to child care providers.

Pritzker said the initial allotments were distributed in 78 of the state’s 102 counties.

“The initial focus of these grants has been on businesses that have been most severely impacted by COVID-19 — those that were completely shut down in the spring and those that are in COVID-impacted areas that experienced property damage amidst the looting and civil unrest in June,” the governor said at a COVID-19 news conference in Chicago Wednesday.

Vanetta Roy, owner of the Surf’s Up restaurant in Chicago, said her business received a grant and will use the money for hiring, training and “to fully get back on track.”

“As a black woman in business, this money will allow me to continue to progress, and to be successful. And to show that we as a people can be just as successful as anyone else,” Roy said at the news conference.

More than $24 million of the first allotment will go to disproportionately impacted areas as designated by the General Assembly. These include areas significantly impacted by COVID-19 and other adverse economic conditions. In total, 30 percent of BIG funds will go to businesses located in those areas.

The governor’s office said more than 5,000 businesses applied for the grants and those who received them were chosen by random lottery.

Michael Negron, acting director of the state’s Department of Commerce and Economic Opportunity, acknowledged “there is much more we must do” amid historic impacts felt by the pandemic. DCEO oversees the grants.

“Ultimately, revitalizing our economy must start with getting the pandemic under control,” he said at the news conference. “That means following the public health guidelines, wearing a mask, maintaining a safe social distance of six feet and washing your hands regularly.”

The state reported another 1,652 confirmed cases of the virus Wednesday among 42,098 tests completed over the previous 24 hours. That made for a one-day positivity rate of 3.9 percent, which kept the statewide, seven-day rolling average at 4.1 percent.

There were another 16 virus-related deaths reported Wednesday, bringing the total to 7,672 out of  198,593 confirmed cases since the pandemic began. More than 3.18 million tests have been completed.

Dr. Ngozi Ezike, director of the Illinois Department of Public Health, said she continues to be troubled by the upward trend in virus cases in the state.

While she said most people have mild to moderate symptoms that last only weeks, the long-term effects of the virus are not yet known.

She once again urged all Illinoisans to wear face coverings and keep distance from others in public.

Pritzker called the news conference to discuss the financial effects of the virus and associated government shutdowns, and when questioned he said he does not want to send the state back down that path.

“That’s the last thing that’s on my mind if I can avoid it,” he said of potential shutdowns. “But the truth is that if we keep going in the wrong direction, we will inevitably get there…That’s why I want everybody to take personal responsibility.”

A new rule allowing health officials to levy fines against businesses that are lax on social distancing and face-covering requirements will help in that area, he said.

“I want to emphasize again that local officials should pay close attention to the data for their communities, and, where necessary, step up and impose greater mitigations on a targeted basis to bring down the number of infections or the positivity rate,” he said.