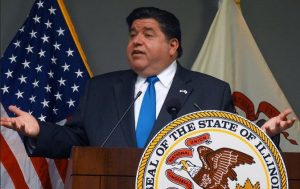 At a news conference in Springfield Monday, Gov. JB Pritzker warns that deep spending cuts and layoffs will result in Illinois and nationwide if Congress does not approve a coronavirus relief package that includes aid to state and local governments that have seen sharp revenue declines during the pandemic. (Capitol News Illinois photo by Peter Hancock)

SPRINGFIELD – Gov. JB Pritzker said Monday that Illinois faces the prospect of having to make deep spending cuts over the rest of the fiscal year if Congress does not pass an economic relief package that helps states make up for the massive loss in revenue they’ve seen since the start of the COVID-19 pandemic.

“I continue to do my part to make calls, to make sure that people understand that Republican-led states and Democratic-led states all have this challenge of revenues that fell off a cliff because of COVID-19,” Pritzker said during a news conference in Springfield.

COVID-19 first appeared in Illinois in January and it quickly spread to all corners of the state, prompting Pritzker to issue a stay-at-home order that virtually shut down major segments of the economy. Similar economic restrictions were imposed in other states as well, although many were less strict than those in Illinois.

As a result, base revenues flowing into state coffers fell during the fiscal year that ended June 30 by a little more than $1.1 billion.

In May, state lawmakers passed a budget for the new fiscal year that began July 1. That budget was roughly $5 billion out of balance compared to revenue estimates available at the time, but the plan was to fill in the gap by borrowing from the Federal Reserve and by passage of a proposed constitutional amendment to allow the state to levy a “graduated” income tax that would impose higher tax rates on higher levels of income.

The budget authorized borrowing roughly $4.5 billion through the Federal Reserve’s Municipal Liquidity Facility, something the Fed board approved earlier this year as a way to help state and large local governments make up for the loss of revenue they’ve seen.

In Illinois, the plan was to borrow that money and pay it back with aid that lawmakers expected Congress to approve.

Republicans in the General Assembly argued against that plan, saying it would be unwise to rely on short-term borrowing to balance the budget, especially when it was still unknown what, if any, kind of relief package Congress would authorize in the future.

But Democrats argued that using the Federal Reserve’s credit program was the best option available because it enabled the state to continue spending and spurring economic activity at a time when businesses and consumers couldn’t.

Now, as negotiations between the Democratic-led U.S. House and Republican-led U.S. Senate have dragged on, many observers say it looks increasingly less likely that the next economic relief package will include aid to states.

Although the House has passed its own version of a relief package that includes about $500 billion to help states make up for their lost revenue, the latest Senate proposal does not include such aid.

And as recently as July 23, U.S. Treasury Secretary Steven Mnuchin told CNBC that, “the president is not going to bail out Chicago and New York and other states that prior to the coronavirus were mismanaged.”

Without federal aid, however, Pritzker said Monday that there will be significant cuts and job layoffs in Illinois and throughout the country.

“But this is going to be up to the Congress. They’re the ones who have the ability to help us and to help all 50 states with the challenge we all have. But there are going to be layoffs across the country, not just related to state government, but when you don’t fund state and local governments you’re going to see, and you’ve already seen to some degree, layoffs,” Pritzker said. “Not to mention those who provide services to state and local governments, private companies whose contracts no doubt will be put aside because the money isn’t flowing, because we don’t have the ability to balance the budget in the way that we had originally intended to.”