PHOTO: Thomas DeVore, a downstate attorney with at least 12 cases pending against the state of Illinois, says he will halt proceedings in each of them if the General Assembly meets in Springfield to address Gov. JB Pritzker’s ongoing management of the novel coronavirus. In an open letter sent to the four legislative leaders Wednesday, he wrote residents are “growing weary” of continued restrictions. (Photo credit: BlueRoomStream.com)

SPRINGFIELD — The downstate attorney challenging aspects of Illinois Gov. JB Pritzker’s COVID-19 response said Wednesday he would halt the progress of his “dozen or so” lawsuits if legislators return to Springfield.

At the heart of Thomas DeVore’s many cases in several Illinois counties is the question of whether an Illinois governor is constitutionally and legally authorized to exercise unilateral control over the management of a disaster, such as the public health emergency posed by the novel coronavirus.

He also represents “hundreds” of citizens and business owners as well, he said. 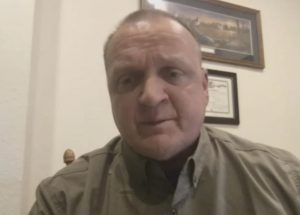 DeVore told Capitol News Illinois in a phone call Wednesday that while lawmakers are barred by the U.S. constitution from delegating their powers to another branch of government indefinitely, the legislative body’s lack of action suggests an intention to flout those requirements.

As the head of the executive branch, Pritzker “should not have to” consult with Illinoisans about how best to prevent the spread of COVID-19 — that is the Legislature’s job, he added.

In an open letter DeVore sent to the General Assembly’s four legislative leaders Wednesday afternoon, the attorney wrote he is “imploring” lawmakers to determine rules for schools and businesses so both can safely resume operations without harming public health.

“The legislature is the voice of the people, and I am afraid of what is to come in the weeks ahead without your involvement in crafting wise solutions,” DeVore wrote.

A spokesperson for Senate President Don Harmon (D-Oak Park) wrote in an email that “the Senate has no plans at this time to reconvene before the scheduled veto session in November.”

“Far too much ink has been spilled over the last several months in courtrooms across this state” through lawsuits such as his own, DeVore wrote in the letter.

“None of this litigation has served the best interests of the good people of our state, as litigation is never the answer to matters such as these, and should only be a solution when no other viable options exist,” he added.

Xenia Republican Rep. Darren Bailey — whose Clay County lawsuit alleging Pritzker overstepped his authority in managing the novel coronavirus pandemic is perhaps the best known of DeVore’s cases — said “none of these lawsuits may have existed” if lawmakers convened in Springfield to “confirm the details of how things should work.”

He added the Legislature’s lack of action since May, ongoing federal investigations into Illinois officials and decreased state revenues as a result of the virus are “a wakeup call to the citizens of this state.”

His attorney in that case, DeVore, wrote in his letter that “an ever increasing number” of residents “are growing weary” of actions taken solely by the executive branch to close businesses, implement social gathering restrictions and change school rules.

Rep. John Cabello, a Republican from Machesney Park and another of DeVore’s clients who filed a similar lawsuit against Pritzker, said he thinks members of the General Assembly should tackle corruption, unemployment and the budget shortfall. But, he said, he does not “believe whatsoever” a session will be scheduled before the Fall veto session.

He dropped his case challenging the governor’s use of emergency powers on July 22.

“(Michael Madigan) obviously controls the agenda, so we’ll have to wait and see what comes about, but I’m not holding my breath that we do anything really good,” Cabello said of the Speaker recently embroiled in a federal corruption investigation. “Any time legislators are in Springfield, something bad happens to the taxpayers of this state.”