The pressure on longtime Illinois House Speaker Michael Madigan to step down is mounting.

Madigan hasn’t been charged with a crime. However, he has been embroiled in charging documents the U.S. Department of Justice secured against ComEd. The utility agreed to pay a $200 million fine for taking part in a patronage scandal with Madigan associates in exchange for favorable legislation. 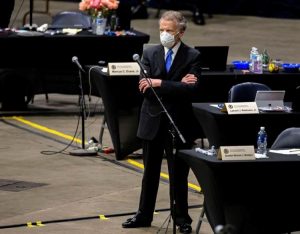 In a statement on Tuesday, state Sen. Heather Steans, D-Chicago, was the latest high-profile elected official to call for Madigan to step down from leadership. The statement published to a political blog said the ComEd agreement painted a “sordid picture of bribery, influence peddling and insider-dealing at the highest levels.”

She called for Madigan to resign as Speaker of the House and to step down as chairman of the Democratic Party of Illinois. She said while Madigan hasn’t been charged, public servants in such leadership roles should avoid even the perception of wrongdoing.

“Speaker Madigan’s continued service in the legislature and on the Democratic State Central Committee are matters for his constituents to decide,” Steans said. “The many ethical questions swirling around him, however, should disqualify him from legislative or party leadership posts.”

“I would anticipate from reading this indictment and seeing what’s transpired thus far that there will be an indictment to come forward here in the next 30 days,” LaHood told WMAY radio.

“I also anticipate that there will be people at the highest level of Commonwealth Edison and people within the state of Illinois and former elected officials, some of which are cooperating with the FBI to come forward and testify against Madigan,” LaHood said. “The feds don’t normally bring a case like this unless they have what they believe is a winnable case.”

“ComEd admitted that its efforts to influence and reward the high-level elected official – identified in the Statement of Facts as ‘Public Official A’ – began in or around 2011 and continued through in or around 2019,” the office of the U.S. Attorney for the Northern District of Illinois announced earlier this month. “The company admitted that it arranged for jobs and vendor subcontracts for Public Official A’s political allies and workers even in instances where those people performed little or no work that they were purportedly hired by ComEd to perform.”

Madigan has served in the House since 1971. He’s been Speaker of the House for all but two years since 1983. He’s been chairman of the Democratic Party of Illinois since 1998.

Madigan has said he has done nothing wrong.

This story is by Greg Bishop, staff reporter with The Center Square