SPRINGFIELD – A juvenile detention facility and two mental health centers in Illinois each reported outbreaks of COVID-19 on Tuesday.

The Illinois Department of Juvenile Justice youth center in St. Charles reported 16 new cases of COVID-19 in staff and three new cases among youth at the facility.

This prompted “increased mitigation and infection control measures,” according to a news release from the Illinois Department of Public Health, which said all youth and staff have been tested for the virus and the facility is “implementing programming changes to reduce further spread.”

The announcement came as the state’s seven-day rolling COVID-19 test positivity rate ticked up to 3.1 percent Tuesday as IDPH announced 955 new confirmed cases of the virus.

That was among 29,745 tests completed over the previous 24 hours, making for a one-day positivity rate of 3.2 percent. IDPH also reported another 23 virus-related deaths, bringing the total since the pandemic first reached Illinois to 7,324 among 163,703 confirmed cases.

The highest positivity rate for the state’s 11 regions was in the Metro East area on the Missouri border. The IDPH website had data through only July 17 on Tuesday, which showed a positivity rate of 7.1 percent in the area.

“I want to remind everyone that this pandemic is still very much here,” Pritzker said at an unrelated event in Collinsville. “And it remains a very serious threat. People are getting sick and dying. The Metro East region has one of the highest rates of cases and transmission in the state, even as the rest of the state remains fairly steady.”

He added: “You’ve all seen the death toll rising in Florida and Texas, in Arizona, Alabama, North Carolina, in California. This is no joke. This is no hoax. Metro East is at risk, as any area of the country, of tipping over to the higher case and death counts that we see in other parts of the country.”

Pritzker said the state “will take immediate action to impose additional mitigations” if there’s an increase in the rolling positivity rate for COVID-19 tests along with increased hospital admissions or decreased surge capacities. Action will also follow if a region passes an 8 percent rolling seven-day average.

“That can mean the closing of indoor bar service and reduction in indoor dining capacity, greater limitations on group gathering sizes and room capacity, and a return to remote work for high-risk individuals,” the governor said. “It could also mean capacity restrictions for organized group recreational activities, gyms and retail, and shutdowns at salons and personal care facilities.”

He said local leaders “must do what they know is right to protect their residents.”

He once again urged wearing masks and staying away from large crowds.

“To a large degree, this is about personal responsibility,” Pritzker said. “Nobody can, you know, be following you all day long and telling you ‘put on a mask’ when you go into a public place. Everybody needs to know that that’s what they need to do. And it isn’t just about keeping you healthy. It’s really about keeping other people healthy.”

At the end of Monday, there were 1,466 hospital beds in use by COVID-19 patients, including 320 in intensive care unit beds and 142 on ventilators. Those were all slight increases from the day before, but still mostly at the average level of the past three weeks. 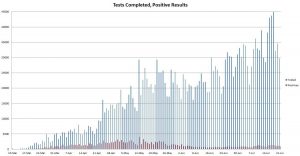