Gov. JB Pritzker joined the Illinois Department of Transportation Tuesday in Collinsville to announce the release of a $21.3 billion plan to improve Illinois roads and bridges over the next six years.

The investment, which effects communities throughout the state, is part of the governor’s Rebuild Illinois capital plan, the first in nearly a decade.

“Illinois remains a hub for commerce and transit – and not just for this nation, but for the entire global economy. We are the fifth-largest economy in the United States, and the crossroads for national and international companies who need our roads and airports and rail and rivers and people to move their products,” said Pritzker. “Even in a pandemic – especially in a pandemic – our transportation systems connect the lives of our residents and our communities. Our roads and bridges deliver Illinoisans to work and home again, to school, to the pharmacy, to the doctor’s office. The Multi-Year Plan we’re announcing today provides funding to reconstruct over 3,300 miles of roads and over 8 million square feet of bridges – and, more importantly, create and support hundreds of thousands of jobs over the next 6 years for hardworking Illinoisans across our state.”

Last year, Pritzker announced the first multi-year plan under Rebuild Illinois. Since then, IDOT began multiple construction projects including the ongoing $67 million Interstate 255 (I-255) rehabilitation project in St. Clair and Madison counties. Construction, which began in February of this year, will fix one of the worst roads in the state. By closing I-255 completely, IDOT will be able to complete the work in one construction season instead of several, saving an anticipated $14 million that can be reinvested in other projects. The administration will look to replicate that approach in other parts of the state.

“Under the leadership of Gov. Pritzker, IDOT throughout the COVID-19 pandemic, has focused on continued investments in infrastructure to keep people safe and the economy moving,” said Acting Illinois Transportation Secretary Omer Osman. “The multi-year plan keeps us on task during these uncertain times. While we are not cutting or delaying projects, we will continue monitoring the impacts on future revenues to ensure we are investing taxpayer resources wisely.”

Based on current funding levels, the FY2021-26 Proposed Highway Improvement Program will improve 3,356 miles of roads and 8.4 million square feet of bridge deck. Of the total $21.3 billion included in the six-year program, $3.15 billion has been identified for the current fiscal year.

The program will create and support hundreds of thousands of earning opportunities over the next six years for Illinois residents in communities across the state. As the Illinois economy begins to recover from the COVID-19 crisis, these jobs will be a critical resource for families working to get back on their feet.

Projects included in the program were selected based on objective criteria, such as pavement conditions, traffic volumes, and crash history. Over the next six years, $6.1 billion of the funding will go toward highway reconstruction and preservation, $4.7 billion towards bridge improvements, $2.6 billion for strategic expansion, $1.8 billion for system support like engineering and land acquisition, and $1.4 billion for safety and system modernizations.

The Pritzker administration has said will continue to prioritize repairing and replacing the state’s infrastructure before it deteriorates, a practice not followed by previous administrations. The administration aims to extend the life of Illinois roads and bridges, improve public safety, and operate transparently while saving taxpayers billions of dollars in the long run.

Passed in 2019, the bipartisan Rebuild Illinois is investing a total $33.2 billion into the state’s aging transportation system, creating jobs and promoting economic growth. Rebuild Illinois is not only the largest capital program in state history, but also the first one that touches all modes of Illinois transportation: roads and bridges, transit, waterways, freight and passenger rail, aviation, and bicycle and pedestrian accommodations. 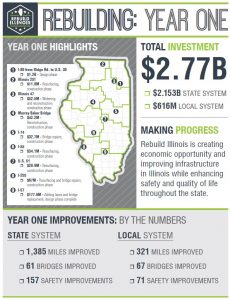