SPRINGFIELD – Illinois’ largest electric utility company has agreed to pay $200 million to resolve a federal investigation into a “yearslong bribery scheme” that was aimed, at least in part, at powerful longtime Illinois House Speaker Michael Madigan and those surrounding him, according to court documents filed Friday by the U.S. Attorney’s Office in Chicago. 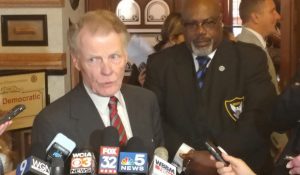 In a news release, the attorney’s office announced a deferred prosecution agreement, in which Commonwealth Edison “admitted it arranged jobs, vendor subcontracts, and monetary payments associated with those jobs and subcontracts, for various associates of a high-level elected official” in order to curry favor in the legislative process. The company admitted that the monetary benefits of certain favorable legislation “exceeded $150 million,” according to a court document.

While the name Michael Madigan does not directly appear in the document, the Chicago Democrat has been Illinois’ speaker of the house since 1983 – except for a brief stint from 1995 to 1997 – and is the longest-serving member of the House. The documents also did not contain any charges against the official identified as the House Speaker.

The public utility company, which is subject to heavy state regulation, “understood that, as Speaker of the House of Representatives, Public Official A was able to exercise control over what measures were called for a vote in the House of Representatives and had substantial influence and control over fellow lawmakers concerning legislation, including legislation that affected ComEd.”

ComEd admitted that its attempts to influence the legislative process began in 2011 and continued through 2019.

“During that time, the Illinois General Assembly considered bills and passed legislation that had a substantial impact on ComEd’s operations and profitability, including legislation that affected the regulatory process used to determine the electricity rates ComEd charged its customers,” the U.S. attorney’s office said in a news release.

The attorney’s office filed a one-count criminal information document charging ComEd with bribery, with the agreement that it will defer prosecution for three years and seek to dismiss it if ComEd abides by certain conditions, including “continuing to cooperate with ongoing investigations of individuals or other entities related to the conduct described in the bribery charge.”

A court still has to approve the deferred prosecution agreement, but a date for approval has not yet been set.

The electric utility also admitted in the court document that it appointed an individual to its board of directors and retained a particular law firm “at the request of Public Official A.” It also accepted into an internship program “a specified target number of students who primarily resided in a Chicago ward that Public Official A was associated with.”

The U.S. attorney’s office had a news conference scheduled for 12:30 p.m. Friday in Chicago to “announce developments in a public corruption investigation.” Madigan’s spokesman did not immediately respond to an email request for comment Friday.

Federal authorities have been conducting a seemingly wide-sweeping probe of public corruption that first breached the public’s radar in the second half of 2019.

State Sen. Tom Cullerton, a Villa Park Democrat, was indicted on embezzlement charges in August that alleged he took a salary and benefits from a labor union without doing any work. He continues to serve in the chamber and pleaded not guilty to the charges.

In September, federal agents raided the Statehouse office of then-state Sen. Martin Sandoval, D-Chicago. He resigned his Senate seat in November, and in January he pleaded guilty to a bribery and tax fraud charge pertaining to his dealings with a red light camera company and agreed to continue to work with investigators.

Luis Arroyo, also a Chicago Democrat and former state representative, was arrested in October for allegedly passing a bribe to a state senator for favorable treatment of legislation pertaining to gambling devices known as sweepstakes machines. He pleaded not guilty to the bribery charges in February, but waived a right to be indicted by a federal grand jury, “again signaling plans to eventually plead guilty in his corruption case,” according to a report in the Chicago Sun-Times.

It is unclear if the corruption investigations are part of one larger probe, or are independent of each other.