MARYVILLE – Recognizing the devastating effects isolation and emotional abuse could have on seniors during the pandemic, state Senator Rachelle Crowe, D-Glen Carbon, led a discussion about how to create additional protections for seniors at the final meeting of the Elder Abuse Task Force held Wednesday via teleconference. 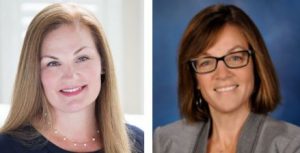 “As a former prosecutor, I have witnessed numerous cases of older people being targeted, from scams to criminal abuse. Getting all involved departments into one discussion was an effective way to hear about the many forms elder abuse can take and the many ways it can harm,” Crowe (left) said. “Considering the initiatives the group is exploring, I’m confident they’ll provide solutions we can act on to fight this growing threat to our elders.”

“The unique circumstances of COVID-19 can lead to more instances of elder abuse going undetected or unreported,” said State Rep. Katie Stuart, D-Edwardsville (right). “Our most recent task force meeting yielded several good ideas on how to strengthen current elder protections and bring awareness to this often hidden problem, and I am encouraged by the work of everyone involved to protect our seniors.”

Members of the task force discussed potential legislative solutions, including expanding the statute definitions of abuse and mandated reporters. The public were also allotted time to discuss their ideas with the task force.

“I thank Sen. Crowe, Rep. Stuart and the 22 members of the Elder Abuse Task Force for their leadership in confronting this under-identified and under-reported crisis,” said Paula Basta, director of the Department of Aging. “We all have the right to be treated with dignity and respect – to feel safe and secure. When it comes to the mistreatment of elders and persons with disabilities, we cannot assume that someone else will report it. We need every Illinois resident to engage to make the change.”

Created in 2019, the Elder Abuse Task Force is a committee consisting of agency heads, elder abuse experts, legislators and law enforcement. Illinois is the ninth state to create a working group focused on fighting elder abuse.

“By working together with our community partners, law enforcement has evolved with a better understanding of those they have sworn to protect and provided an enhanced response to issues important to our elderly citizens,” said Tharp.

“Within my role as an assistant state’s attorney, my concentration as a prosecutor has been to protect seniors,” said Genovese. “I commend the work of Sen. Crowe, Rep. Stuart, the Madison County’s Sheriff’s Office and the task force.”

Those who are experiencing abuse, neglect, or financial exploitation – or suspect someone they know is experiencing them – should call the statewide 24-hour Abuse Hotline at (866) 800-1409, or visit the Dept. on Aging’s website.