Gov. JB Pritzker on Tuesday signed Senate Bill 1864, a health-care package that includes a proposal by Sen. Andy Manar, D-Bunker Hill, requiring the state’s Medicaid program to cover routine care costs incurred for an approved clinical trial involving the prevention, detection, or treatment of cancer or any other life-threatening disease, as long as Medicaid would normally cover those same routine care costs for a non-clinical procedure.

“It’s not an exaggeration to say that this law will save lives. For too long, some people were granted access to the most advanced and potentially life-saving cancer treatment, and others weren’t, simply depending on which insurance plan they had. That injustice ended today,” Manar said. “I appreciate Gov. Pritzker’s demonstrated commitment to advancing equity in health care.”

Initially introduced and carried through the Senate by Manar, the initiative was included in a broader health care package passed by the General Assembly during the abbreviated special session in May.

More than 20 percent of Illinoisans are covered by Medicaid, making it the second-largest type of insurance behind Medicare. 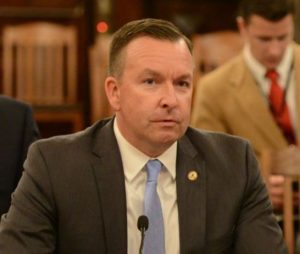 Manar (shown) worked closely with the American Cancer Society to draft the proposal.

“The state has taken an important step to ensure the viability of new cancer research in our state and to allow an additional 20 percent of Illinois residents to have access to the latest treatments and therapies,” said Shana Crews, Government Relations Director at the American Cancer Society Cancer Action Network. “We look forward to working with state leaders to further reduce Illinois’ cancer burden.”