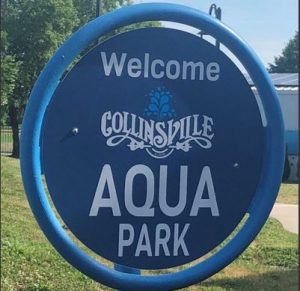 During Phase 3 of Restore Illinois, the park has only been open for private and group swim lessons and therapeutic walks against the current of the lazy river.

As part of the Phase 4 Restore Illinois, visitors will be asked to wear a mask when going through the ticket gates and when in the indoor spaces. Masks are not allowed in the water. Chairs have been moved to accommodate social distancing between families. Rest rooms will be cleaned frequently and chairs, railings and other high touch areas will be cleaned at the beginning of each day. Occupancy is restricted at 50 percent.

Park goers will notice a number of improvements that have been completed since January. All of the pools and slides have received new coats of paint, including improved safety markings. New heavy duty plastic lockers line the walls outside the bathrooms that allow visitors to bring their own locks.The rest rooms include new touch free sinks and non-slip epoxy flooring. New fencing surrounds the perimeter of the facility.

A new shade structure is located between the different pools that can be rented out for birthday parties and special events.

Other renovations are less noticeable for causal visitors but will be very noticeable for residents in the form of cost savings to operate the park. A new energy efficient HVAC system was installed on the Activity Center and a new air conditioning unit for the concession stand. New light fixtures have been installed and light bulbs are being replaced with energy efficient LED bulbs. Variable frequency drives have been installed to run the motors on the lap pool, leisure pool and lazy river regulating the demand placed on the motor so it isn’t running all the time.

Additional solar panels have been installed on the pump houses and an informational kiosk in the lobby of the activity center to monitor the amount of energy being produced on the new panels as well as the large array on the parking structure.

A leak in the lazy river was repaired, keeping hundreds of gallons of water from being wasted over the course of a season.

The Aqua Park is located at 10 Gateway Drive in Collinsville across from the Gateway Convention Center and is still selling season passes at half price which are available at the gate.

A list of frequently asked questions related to the Restore Illinois protocols are available at the City of Collinsville website under Parks And Recreation.