Gov. JB Pritzker signed SB 516 into law on Tuesday, finalizing a gaming package that paves the way for a Chicago casino by reworking existing tax structures, allowing gaming at the State Fair and providing relief during the pandemic. The bill is intended to fund critical infrastructure and create thousands of jobs across the state.

“Working with the General Assembly and Mayor Lightfoot, we accomplished what eluded so many others, and now this momentous legislation tackles key priorities for the State of Illinois – helping to ensure that Chicago can pay for first responders’ pensions and alleviate the burden on property taxpayers, along with investing in universities and hospitals throughout the state,” said JB Pritzker. “Thousands of Illinoisans will be working on these projects, earning a good living that will support their families as we do the important work of rebuilding our crumbling infrastructure and investing in the future.”

“After decades of proposals and false-starts, the Chicago casino has now become law, paving the way for a transformative new funding source for Illinois’ infrastructure, as well as helping shore up Chicago’s own significant pension obligations, in addition to serving as the impetus for a dynamic new entertainment district in our city,” said Chicago Mayor Lori E. Lightfoot. “I am grateful for Governor Pritzker’s support throughout this process.  I also want to give a special thanks to Representatives Rita, Hoffman and Cassidy in the House, as well as Leader Durkin. Additionally, this achievement would not have been possible without the support of President Harmon, Senator Cunningham, and Leader Lightford in the Senate, as well as so many other members in both chambers, along with countless labor and business groups, and community organizations whose collaboration and partnership was instrumental in turning a financially viable Chicago casino into a reality and strengthening the fiscal path for our city’s future.”

“By signing SB 516, the governor has given our statewide capital construction program a big boost, while at the same time providing a measure of financial stability to Chicago’s public safety pensions,” said State Senator Bill Cunningham. “It’s also worth noting that Chicago casino dollars will reduce the pressure placed on city property taxes, which until now have been the only source of revenue for the police and fire pension funds.”

“This is a day many years and many long hours in the making, and it will mean tremendous progress and hope for the Chicago and Illinois economy,” said state Representative Bob Rita. “I want to thank my colleagues in the Legislature, Gov. Pritzker, Mayor Lightfoot and many others for working to build on the good bill we approved last year. This bill will make sure we can move ahead with a casino for Chicago and other communities in Illinois and provide a shot in the arm for our economy and entertainment sectors at a time when everyone is hurting. Brighter days are ahead for Chicago and Illinois from this legislation.”

“I would like to thank the gGovernor and the mayor of the City of Chicago for working with legislators throughout the state to make this bill a reality,” said state Rep. Jay Hoffman, D-Swansea. “This legislation will provide jobs and economic opportunity for all of Illinois by helping fund the largest infrastructure improvement program in the history of the state.”

“I’m pleased that state and city leaders were able to work together to make this proposal a reality,” said state Sen. Mattie Hunter. “This legislation will pay dividends by creating thousands of jobs and strengthening the quality of our infrastructure in Chicago and throughout the state for years to come.”

“This legislation is important for the future of our state,” said state Rep. Tim Butler.  “From your neighborhood restaurant, to the 2021 State Fair, to a world-class facility in our state’s largest city, all regions of Illinois will benefit from the economic impact of an industry strengthened with this legislation.  Our Rebuild Illinois capital program will benefit with significant revenue coming from the long-discussed Chicago casino, which now will become reality. Those dollars will help fund construction in all corners of the state. Bipartisan collaboration across our state is key to moving us forward, and that is exactly what happened here.”

The bill establishes new Privilege Tax schedules for the Chicago casino and provides tax relief for existing casinos by extending the payment period for reconciliation payments and waiving interest on those payments. Existing casinos will also find relief from the accelerated Privilege Tax rate structure and the one-year extension of the sports wagering license fee due date.

The new Chicago casino tax schedule is as follows: 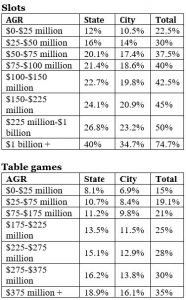 Other changes included in the legislation include allowing the Illinois Department of Agriculture (IDOA) to operate video gaming terminals at the Springfield and Du Quoin State Fairs. IDOA will select Illinois Gaming Board-licensed terminal operators pursuant to the Illinois Procurement Code for an operational period of three years.  Monies bid by the terminal operators will be deposited into the State Fairgrounds Capital Improvements and Harness Racing Fund. Terminal operators will still be able to operate up to 50 video gaming terminals (VGTs) at the Springfield State Fair and up to 30 VGTs at the Du Quoin State Fair.

The legislation also seeks to provide relief in the midst of the global COVID-19 pandemic by:

Requires the Illinois Gaming Board to reopen the license application process for new casino owners’ licenses if, at any point after June 1, 2020, there are no pending applications for one of the new owners’ licenses and not all of the new owners’ licenses have been issued (rather than if the Illinois Gaming Board does not issue all owners licenses for newly authorized casinos within the specified time period).  Additionally, it requires that, as a part of this process, the applicant for a license make a public presentation to the local corporate authority and post a summary of its casino proposal on a public website.

Provides that the new, lower privilege (wagering) tax schedule enacted by P.A. 101-0031 shall take effect on July 1, 2020 instead of the first day that one of the newly authorized casinos begins operations, either in a temporary or permanent facility.  This acceleration of the implementation of the lower Privilege Tax schedule will apply to all existing Illinois casinos.

Provides that amounts paid by organization gaming licensees (“racinos”) to their purse accounts as required by Section 56 (b) (1) of the Horse Racing Act of 1975 [203 ILCS 5/56 (b) (1)] shall not be counted as part of their AGR for tax purposes.

Amends the Sports Wagering Act by delaying, from July 1, 2020 to July 1, 2021, the deadline for payment of the initial sports wagering license fee by an organization licensee (i.e., owner of a racetrack) or an owner’s license (for a casino).

Provides that, from the tax revenues received by the State Gaming Fund from the Chicago casino, an amount equal to 0.5 percent of AGR shall be paid to Cook County for the purpose of enhancing its criminal justice system, and the balance shall be paid to the City of Chicago for required pension payments in accordance with Public Act 99-506.