Director of Wastewater Treatment and Sewer Lines Royce Carlisle was hired by the city of Belleville in 1986 as a wastewater treatment plant operator. Looking back over his career of 34 years, memories of levitating manhole covers, extracting vehicle parts from giant sewer lines, and multi-million-dollar projects flood his mind.

“It’s been a wild ride,” said Carlisle, who will retire from the city on June 26. “As a young man, I didn’t anticipate a career like this, but I’ve grown to love this job, and all told, we manage some of the most important things needed for the city to operate and for residents to live comfortably.”

The crux of his responsibilities includes managing a team of professionals who work to ensure water in the City of Belleville is clean per the Illinois Environmental Protection Agency’s National Pollutant Discharge Elimination System. But, a lot goes into ensuring clean water for a municipality.

“When I was hired as the superintendent of wastewater in the early 2000s, the city was mandated by the IEPA to do something about the combined sewer overflow throughout the city,” he said. “So, in 2003, we began putting together our long-term control plan, which we started to implement four years later with approval from the IEPA. It took a lot of work and collaboration to remediate the issues we had throughout the city.”

Every year since then, Carlisle and his team have worked on that plan, which has resulted in reducing the combined sewer overflow by nearly 80 percent presently.

Another point of pride for Carlisle are the facility improvements at the Wastewater Treatment Plant.

“The plant was built in 1939 and needed some very serious upgrades to ensure both employee safety and operations of the plant,” he said.

Those upgrades included expanding the plant, upgrading the sludge digesters, and replacing the outdated filter system, to name just a few of the improvements. Carlisle also worked hard to equip his team with the proper tools to do their field work like a sewer camera and a clever device called “Mr. Manhole.”

“I am fortunate to have worked with Mayor Eckert because he saw the great need we had and provided us the resources to be able to enhance what we do, improve facilities, heighten safety, be more efficient, and ultimately save tax payer dollars while becoming compliant with state mandates,” said Carlisle.

Not to be forgotten are the 250 miles of subterranean sewer lines, some of which are a century old, that needed major repairs and maintenance. 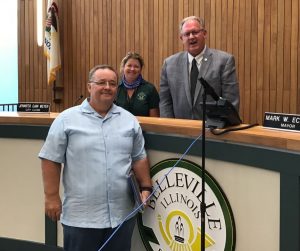 “I’ll be honest, it was kind of like herding cats when I first took over the sewer lines,” he said. “We had a lot of work to do on them, which was causing overflow and backup at various locations throughout the city.”

But since that time and because he ensured his crews had the proper equipment to do the work, the sewer lines throughout the city have been cleaned, replaced, repaired, relined, and in some cases rerouted to ensure stronger and better infrastructure underground.

“The work we do in this department certainly isn’t glamorous and is often forgotten,” said Carlisle. “We usually hear more gripes than accolades, but we’ve been able to improve so much. The plant is running the way it should; we are well on our way to fixing the combined sewer overflow issues; and, we’ve ensured the city has the capacity to grow.”

With the plant expansion and updated sewer lines, the city was able to welcome the construction of new subdivisions, the shopping centers at Green Mount Commons and Belleville Crossing, and the new Belle Valley School, with more room for the city to continue to grow.

“A lot of people don’t realize that if you don’t have the proper underground infrastructure, you cannot expand or build new things in a city,” explained Carlisle. “The IEPA told us our plant was nearing capacity in the early 2000s at about 7 million gallons of water a day. So, we had to work to ensure our city could continue to grow and attract new residential and commercial construction, and we’ve been able to do that.”

Upon his retirement, Carlisle says he will remain close to his colleagues because he has built strong friendships over the years, but he does look forward to things like no longer being on-call all day, every day, or worrying about what issues will arise in the middle of the night during a rain storm. He intends to travel with his wife Dot, enjoy time with his children and four grandchildren, complete a few honey-do lists, and become more active in his fraternal organizations, the St. Clair County Masons and the Ainad Shriners.

“A career in wastewater has been very good to me,” he said. “I am grateful for my colleagues, for the leadership, and for the residents of Belleville who have provided me a good career and living by taking care of their water.”

PHOTO: Retiring after 34 years from the City of Belleville is Director of Wastewater Treatment and Sewer Lines Royce Carlisle, who is pictured here with Mayor Mark Eckert and City Clerk Jennifer Gain-Meyer.