SPRINGFIELD — While new unemployment claims remained historically high in the final week of May, the surge of new claims since the start of the COVID-19 pandemic appears to be starting to slow as a number of businesses begin to reopen after two months of forced closure.

The U.S. Department of Labor reported that 46,522 workers in Illinois filed first-time claims during the week that ended Saturday, May 30.  While that number would be considered shockingly high in normal times, it was actually 20 percent lower than the week before when 58,263 new claims were filed.

The number of workers receiving continuing unemployment benefits was also down about 5.5 percent from the previous week, to 720,580.

From March 1 through May 30, the Illinois Department of Employment security has processed more than 1.36 million unemployment claims, nearly 11.5 times the number of claims processed over the same period last year.

The agency also processed 98,757 applications for Pandemic Unemployment Assistance, or PUA, a federally-funded program for workers who lost their jobs for specific COVID-19-related reasons and do not qualify for regular unemployment. IDES also processed 42,119 applications for Pandemic Emergency Unemployment Compensation, or PEUC, another federally-funded program that extends benefits to people who have already exhausted their regular state unemployment benefits.

Gov. JB Pritzker ordered the closure of many nonessential businesses on March 20. In the days before that, he also ordered all K-12 schools to close and restricted restaurants to delivery, drive-thru or curbside pick-up service.

While the stay-at-home order was in place, however, the state of Illinois suffered a historic drop in revenue, according to the Commission on Government Forecasting and Accountability, or CoGFA.

The biggest hit came in the form of retail sales taxes, which were down $182 million, or 23.1 percent.

CoGFA’s latest monthly report also detailed the extent of the economic slowdown. Based on the number of routing requests made to Apple Maps, driving was down more than 60 percent in the state of Illinois and the city of Chicago during the third week of March compared to mid-January. It remained down about 40-50 percent in April for both Illinois and the nation.

Those numbers steadily improved throughout May and are now back to about the same levels as before the pandemic, CoGFA said.

Also, restaurant reservations on the website OpenTable.com were down 100 percent in Illinois during April and May. And even in states that reopened sooner than Illinois, reservations were still down 60-70 percent.

“Both the U.S. and the State of Illinois have a difficult path to walk as concerns between public health and economic health must be weighed,” the report stated. “The key to rebounding from this economic slow-down is to provide an environment where both customers and employees feel safe, while ‘reopening’ fast enough so that those employees who have been furloughed have a job to come back to. The longer it takes to ramp up economic activity, the more likely businesses will close down for good.” 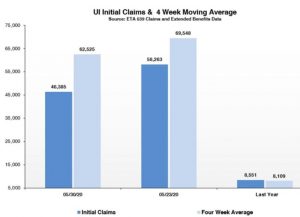