Black Caucus: ‘Far too much to accomplish’ to let looting take away from message

SPRINGFIELD — Members of the Illinois Legislative Black Caucus detailed their ongoing fight for racial equality and made calls for the end of looting at a news conference held at a recently-looted strip mall Tuesday on the south side of Chicago.

“What we are seeing is pent up anger and frustration and neglect manifest itself in a very ugly way, but pain is ugly, and when people have had enough, it comes out in all forms,” state Sen. Kimberly Lightford, D-Maywood, said at the event. “But don’t get me wrong, I do not condone destruction of property, especially in our own communities, where you lay your own head. 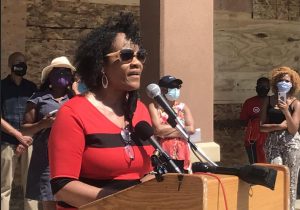 “But I understand the sense of hopelessness that people are feeling. And I’m tired of people telling me, and us in the Black Caucus, what to do instead of simply providing opportunities for us and our people.”

The lawmakers made their call amid ongoing protests over the death of George Floyd, an unarmed black man who died May 25 in Minneapolis after being pinned to the ground for nearly nine minutes with a white police officer’s knee on his neck.

Rep. Kambium Buckner, D-Chicago, said he’s been in the streets of his community every day for the past week speaking to young people.

Buckner said people are rightfully angry, but cautioned this could not be “just like every other time” a black person is unjustly killed.

“We need to channel our energies in the right direction and stand with our youth in order to lead the charge to make that happen,” he said. “But I also can’t rightfully sit here and talk about three days of looting in our community — which is wrong — unless I scream about decades of looting of our community, our schools, or hospitals, our hopes, our dreams, our dignity. This time has to be different.”

Members of the Black Caucus also laid out policy initiatives, listed existing legislative wins and called on white leadership in both parties to act on behalf of black communities.

State Sen. Elgie Sims, a Chicago Democrat, said the Black Caucus has worked to make Illinois the first state to authorize body cameras, banned use of the chokehold, made efforts to combat racial profiling permanent, removed barriers to unemployment and obtaining various licenses, and made expungement more available for non-violent offenders.

“The fight continues. And we will continue to work to reform our state, criminal justice system, which has far too often criminalized poverty, mental illness and substance abuse, as opposed to addressing the underlying challenges of years of chronic disinvestment, and the byproduct of the policies of benign neglect.”

The lawmakers said they fought this session to include funding for black communities in the state’s appropriation of federal CARES Act funding, and that education programs and other initiatives important to minority communities did not lose needed financial aid.

Going forward, the lawmakers said they wanted to see government investment in the communities hardest hit by looters, many of which were African-American neighborhoods on Chicago’s south and west sides, according to Chicago Democratic Rep. Lamont Robinson Jr.

“Our work is cut out for us,” he said. “We do not accept burned out storefronts and looted shops will be the monument to George Floyd. To rebuild, we need lenders to make sure capital is available. We need the programs and services of our state and local governments laser-focused on returning these businesses to viability, for the sake of our communities.”

Robinson said he owns an insurance business on the south side. His business was spared, although several of his neighbors were hit by looters. He said calls to the police went unanswered in the community.

“I worked hard with my fellow entrepreneurs to build a commercial strip worthy of our customers,” he said. “And now we must figure out how to rebuild from this devastation.”

Robinson said the property damage was worse for businesses already reeling from shutdowns forced by the COVID-19 pandemic and associated stay-at-home orders.

“We do not need rhetoric nor empty promises from the city or state,” he said. “We need guarantees that resources will be readily available and accessible to rebuild our businesses and our communities, the same resources that will be available to our counterparts downtown and on the near north side.”

Dr. Stephanie Johnson, owner of Plano Vision Center, said her businesses was hit by looters. The business provides not-for-profit services to children, adults, and low-income and minority families on the south side.

“I don’t know if you can imagine being a black business owner, seeing the majority of your black community coming in and looting and you can’t do anything,” she said, later adding that those who helped her clean up restored her faith. “I saw young people, meeting me here that day, cleaning out the glass. It did my heart great.”

Still, she said, property can be replaced, and “it doesn’t compare to the devastating loss” of the “countless of other black lives lost to anti-black bias.”

The leaders emphasized spending money at local businesses once they rebuild as well.

Rep. La Shawn Ford, D-Chicago, called on the governor to sign an executive order “to immediately respond to the crisis in our community.” Lightford called on lawmakers to create an Office of Inclusion to be confirmed and “set in stone” by the Illinois Senate.

She also called for police reform that includes accountability to the public, a rehabilitative justice system and access to resources to rebuild minority communities, as well as diversity in corporate boards and management.

“We have far too much to accomplish to let looting continue to take away from our message that black lives matter,” she said. “And we’re sick and tired of asking for basic human rights. We’re demanding our humanity, and I will not let this moment pass us by.”

Lightford called on those present at the news conference to “come to Springfield, bring your organizations, testify, advocate, be a presence, not just in the black community, but at the Statehouse, and we will yield better results for our people.”