Alton Main Street this week announced the winners of the inaugural round of its Façade Improvement Grant Program. 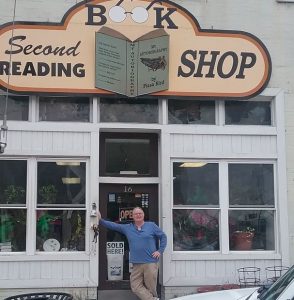 The initiative was designed to assist property and business owners in Downtown Alton with rehabilitating the facades of their buildings for the purpose of creating a positive visual impact, stimulating private investment, and complementing other community development efforts. A total of $2,000 in funding was available, which has been granted to two projects.

“The Dunphy Building, constructed in the Federal style in 1831, served as an Underground Railroad station,” he said. “Fugitive slaves who made their way across the Mississippi River from the slave state of Missouri experienced their first taste of freedom within this building’s walls. It offered them sanctuary before they resumed their journey northward.”

He and Loretta view their ownership of the Dunphy Building as a sacred trust. “An Underground Railroad station is a citadel of liberty,” he said.   “It’s a testament to the courage of the slaves who escaped bondage and the courage of the abolitionists who dared to violate the law by helping these fugitives.  We have a moral responsibility to do all that we can to maintain the Dunphy Building.” 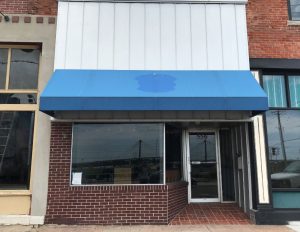 Alton Music Exchange (shown bottom) has been awarded $500 toward a new awning, open flag, flower pots, window graphics, and repairing the door and light of their new location at 556 E. Broadway.

The business, which is slated to open this summer, will offer music equipment to purchase, trade, sell or rent as well as music instruction.

“We at Alton Music Exchange are overjoyed with the willingness and openness that the community in Downtown Alton has had with our small business. From all the effects of COVID-19 this grant will be such a financial relief,” said co-owner Jenny Unfried.

Before and after photos will be available in the fall after the six-month window allotted to the recipients to complete their projects, which required a 1:1 financial match. Applications were scored on a number of criteria, including visual impact, design, sustainability and permanence, and the business’s contributions to the community. Alton Main Street aspires to repeat the grant opportunity in the future, subject to the success of its fundraising efforts.

Research has shown that exterior building improvements result in an increase in sales.

Additionally, improvements motivate owners and tenants of other properties in surrounding areas to make similar investments.

“The organization’s goal is to provide an incentive that encourages improvements to building exteriors which are visible from public streets and sidewalks,” said John Gajewski, chair of Alton Main Street’s Economic Vitality Committee.